I joined BT for the first time in April 2016. My experience has been a nightmare, to be honest.

I switched my TV, phone and broadband to BT. My Infinity connection has been dropping intermittently twice a day, and my youview service did not work at all until I called BT and was sent BT extenders, and it is now working.

When I called about my inifinity problems, I had to wait for over an hour to speak to someone from the 'technical team' who initially carried out some checks and advised that there was nothing wrong with my line. He then changed his tune and said he couldn't help me because my connection was not dropping 'regularly' enough- 5-6 times a day. Outrageous! Naturally I was unhappy with this and asked to speak to his manager (this will be all on the notes) and he agreed. He put me on hold for over half an hour, with the call then ending (not by me).

I then called again and asked to speak to the complaints team (when the automated system asks you what your call is about etc.) and I was put through to someone from the billing team, in the UK. I complained and she understood but she did not log my complaint, rather she said I would still have to speak to the technical team. She offered for them to call me back, within an hour, which I agreed to. Guess what, an hour later no call back.

I then called again, and a complaint appeared to be logged (I was given a complaint number too) and was told I would receive a call. Funnily enough, the same lady from billing called me back and stated I would still have to call the technical team, despite me telling her I had not received the callback.

In conclusion, my connection still dropping every day. I am shocked and disappointed at such a service from a company like BT.

I believe barriers have been raised against me complaining, as per the above sequence of events, so I have passed the matter onto the Communication Ombudsman as well.

I look forward to hearing from the mods on here, as I simply cannot waste hours on the telephone with BT any more.

I can provide my account details etc. via PM.

apart from phoning have you tried anything to see if you can improve the connection?

in order to help can you

are you using the test socket with a new filter

I have tried the tests I could do myself. The line seems quiet. i need BT to help me with this, thats what I pay them good money for!

I also need someone to check if my p2p or traffic is being throttled, as it appears to be the case.

Any help is appreciated in the above regard.
0 Ratings

BT do not throttled connections now. You can check by running glasnost test - just google 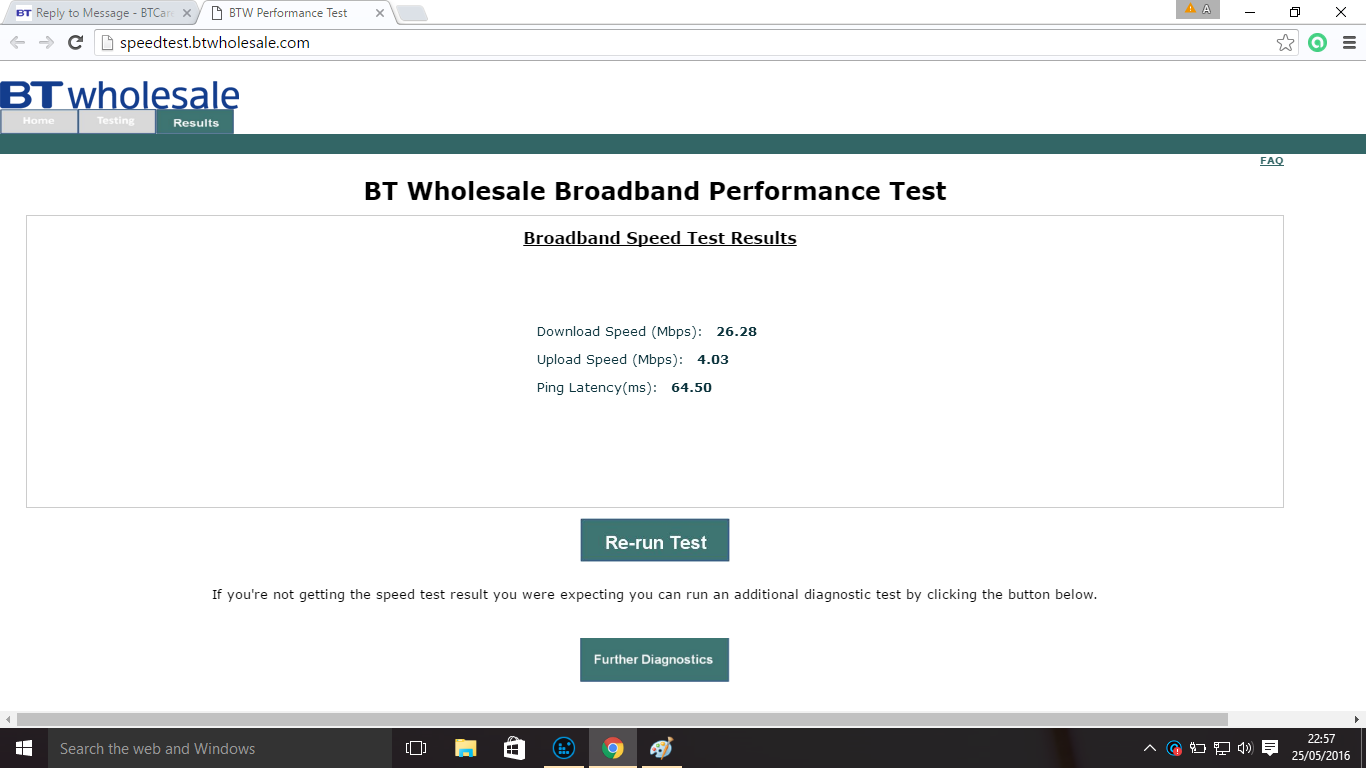 Just to throw my two cents in here.

I had a dropping line for three months and the only useful information and final fix came from the forum team. You're in the right hands here.

On another note - I doubt you'll get compensation. If you read the contract there isn't really anything about service uptime and the minimum amount. You've had a service (although it's been terrible). I've only seen compensation given out for complete loss of service
0 Ratings

If you have noise on quiet line test then you need to report a phone fault   To 151. Get rid of noise and broadband will improve

Hi was your charged for your wi fi extenders ?

No, I wasn't charged for them.

Connection still dropping weeks into my contract, and still no word from BT.

Did you report the phone fault like I suggested previously?  If so have you had engineer visit?