Just moved into a new house and ordered BT Infinity 2 at the start of the week, my situation is that the master socket is in the hallway but i would like the Home Hub to be situatated in the second bedroom (where my PC is), i had planned to extend the master socket myself into the second bedroom but then read that this can effect Infinity 2 speeds as the extensions can't carry fibre speeds, then i read about the BT Data Extension Kit here http://bt.custhelp.com/app/answers/detail/a_id/13751/~/what-is-a-bt-infinity-data-extension-kit%3F i thought, excellent, when the engineer comes out he can install this no problem.

I was told on the phone that an engineer wouldn't be required for our installation, i told the man on the phone that i will need an engineer because i need the master socket extending into another room, i told him about the data extension kit and he seemed to know nothing about it. Nevertheless he put a note on my order than an engineer would be needed to install the data extension kit or move the master socket, he also said it usually would be at no charge, this was all booked in for next Tuesday.

Today i got a text saying no engineer will be coming out as it isn't needed, you can imagine my annoyance when i recieved this text as i was already told one wasn't needed but one was coming anyway for the reasons i have already stated. So i just got off the phone to BT and spoke to a very friendly lady about my situation, she also didn't know anything about the kit and i had to instruct her to google it and she found it, she explained that it would cost me £49 for an engineer call out but theres no guarantee he'll have the kit (i said it's safe to assume he does because of the language used on the page above) she then said she can't amend the order to send an engineer out and that i should wait until Infinity 2 is installed and request another engineer.

This is annoying because it means waiting even longer for a service that i had already agreed, why was the engineer cancelled when i specifically asked for one nearly a week ago? according to the lady i spoke to there was no such note on my order for one to come out, so the person i ordered it with either lied (i clarifed at the end of the phone call that he had made the note) or the lady i spoke to is mistaken.

It's become so frustratiing i just want to cancel the whole thing and go with someone who does offer the services above and doesn't mess you about.

the vast majority of infinity installations are self install especially if you have a phone line.  if the engineer which comes assuming you get engineer is a contractor and not openreach then from other posts unlikely he will fit a data extension kit.  they are in an out as fast as they can unlike the openreach engineer

So what are my options? how do i go about getting an openreach engineer to come out and install a data extension kit? is there even a gurantee he'd be an open reach engineer if i arranged it with BT, they seemed very uncertain that an engineer could even do what i was asking.

Data extension kits are DIY, its only 2 wires.

So how do i go about ordering a BT Data Extension kit to do it myself? (Even the woman on the phone said it was strange there was no option to buy it when she couldn't gurantee the engineer would have one, which would also imply i can't ring up and buy one, otherwise she'd have given me that option)

I would also have preffered an engineer to do it so it that it's proffesionally and neatly installed. I was still told on the phone that an engineer would come out and install it/move the master socket and that was cancelled.

You don't need a kit, just a roll of CW1308 telephone cable and an RJ11 socket. Just cable from the broadband extension connections in the master rather than the voice extension terminals. 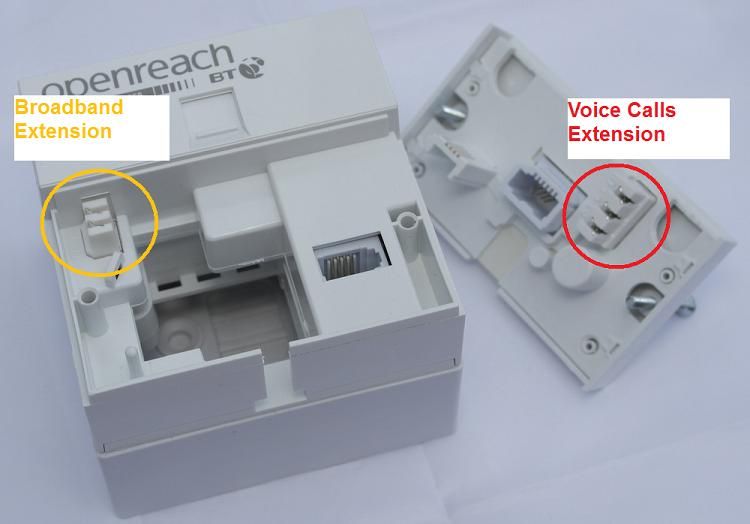 The thing is, the article implies that only this special branded 'BT Infinity data extension kit' can only be used to extend Infinity connections, so naturally i enquired into that, and there should be a method i can get one, otherwise it's just misleading.

If your method is different from the conventional extensions that BT say won't work as well with Infinity then i guess that is my only option, but i would have thought less savy users to networking (like myself) wouldn't be aware that what you suggested wasn't simply a standard telephone extension (that we're told won't work)

There is a lot of rubbish spoken about extending broadband. The signal has come all the way from the green cabinet on any old ropey cable. A few metres of quality twisted pair cable is not going to make any difference. The branded kit will only be CW1306 quality cable, nothing different. The only difference to an extension phone socket is the fact you are wiring to filtered terminals in the master. A conventional extension would be just as likely to work satisfactorily as not. You might get a very slight drop in speed.

The BT tariff guide (broadband sectio) says that the data cabling installation is £35. It implies that's in addition to the nornal £49 service activation. Not sure if has to be done at the same time as service activation, or can be ordered on its own any time?
0 Ratings

Do you already have a phone extension at the PC location?
0 Ratings