I'm having trouble with normal ADSL in RH20, for 11 years I have had a bullet-proof

reliable connection, that eventually went up to 8 Meg and stayed there for years

then suddenly about 1 week ago,I am down to 0.25 Meg download with an SNR

Even more annoyingly despite registering on this forum, logging out and in

I cannot see the 'Post a new Message' option anywhere !. All I can do is

reply to other peoples posts.

Hopefully a moderator will read this and provide an answer.

Welcome to this user forum. @Taffia

I have moved your post to this new thread, so you can get personal help from the community or moderators, so please watch this thread for updates.

Which BT Home hub do you have?

(I still do not have an Option to create a new post myself ????)

that has worked flawlessly for 10 years. What's more, I switch the whole lot off at night, PC, adsl modem/router,

the lot. Then the next day I switch the whole lot on again and it stays on until I go to bed.

Apparently everyone else leaves their router on 24/7, but my trusty 3COM device always connected within

about 30 seconds and gave me 8 Meg immediately. (I don't use wireless at all).

Suddenly about 7 t0 10 days ago I noticed that Iplayer would not play ball, and then I realised that pages

with pictures and heavy graphics were impossibly slow. At that point I had a look at the 3COM stats

and saw a download speed of about 200Kbps and a noise ratio of 30db.

router she said I would have to contact 3COM !! (who no longer exist). I tried again a couple of days

later and got through to a lady in Wales, and she was almost abusive because I didn't have a home

hub. Her argument was 'we sent you one so why aren't your using it, go away' ?. I think I chucked it

away on the basis that why meddle with something that works !.

so then the lady from India did her tests and concluded that there are no faults, so an engineer would

have to come out.

I have a relative who was a BT engineer (joined as an apprentice in 1971, then spent years in most

of the exchanges in the epsom area, been up poles (and fell off one), down ducts, drove yellow Commer

and Morris Marina vans like a maniac, been into peoples homes to fit extensions and pabxs,

and then ended up in their video conferncing/leased line team). Anyway, I sernt him a photo of the way

the BT master socket with the extension wire going back out, up the front of the house, through theloft

and into a bedroom. Standard stuff, and he said it looks OK.

connections 5 and 2 respectively. And the HH3A is plugged into my BT master socket.

I have tried both BT filters.

This has had no effect, download speed is still stuck at 0.25 Meg.

I have used 17070 and the quiet line test is quiet, just a very faint, barely perceptible hiss; no crackles.

It could be a coincidence but at the same time that I noticed the problem, a leaking  water meter was

fixed just uphill from one of the BT concrete chambers that could well supply the entire estate. They

dug up half the pavement and most of the grass verge and this is right across the route the estates BT
cables would take. Call me old-fashioned but ....

This is what the hub shows :-

I see you have only been connected for less than six hours, why is that?

Unfortunately the HH3 does not display the downstream noise margin, so it not possible to see where the problem may be.

This information can only be seen at the BT end.

Switching the home hub off and on can be seen as a fault condition, and the speed will be reduced.

Please can you please provide http://speedtest.btwholesale.com/  results including the further diagnostics page?

This must be done using an Ethernet connection.

This house had an internal extension that was done in the early 80's, or since 1976 anyway.

I have removed the extension, which is why the connection time is low.

And up to a few days ago, I switched everything off at night. Have done so for 11 years. 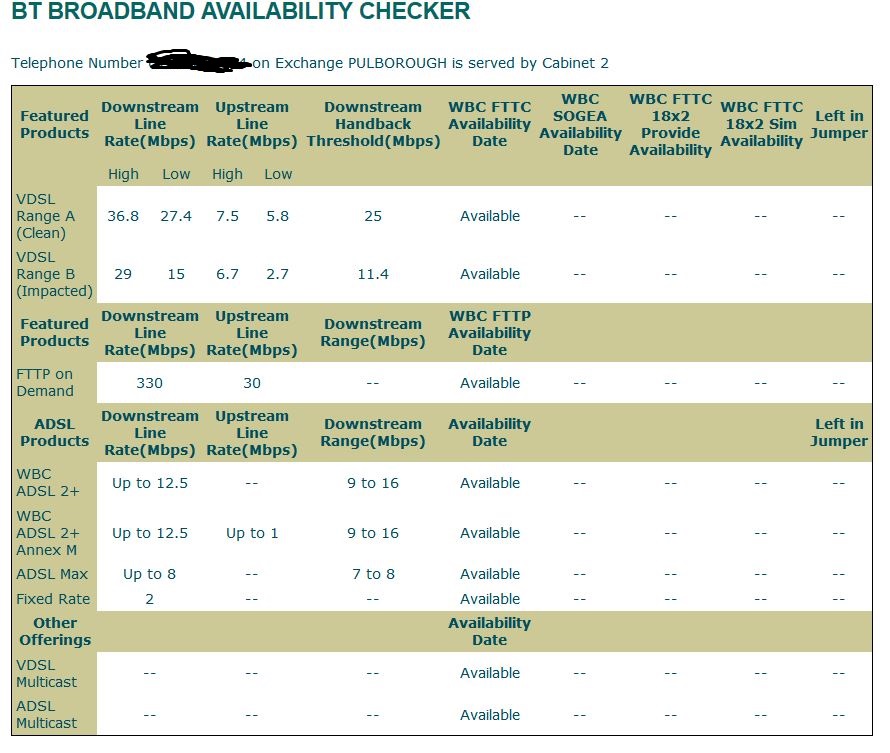 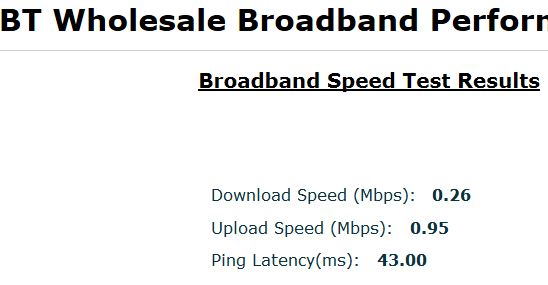 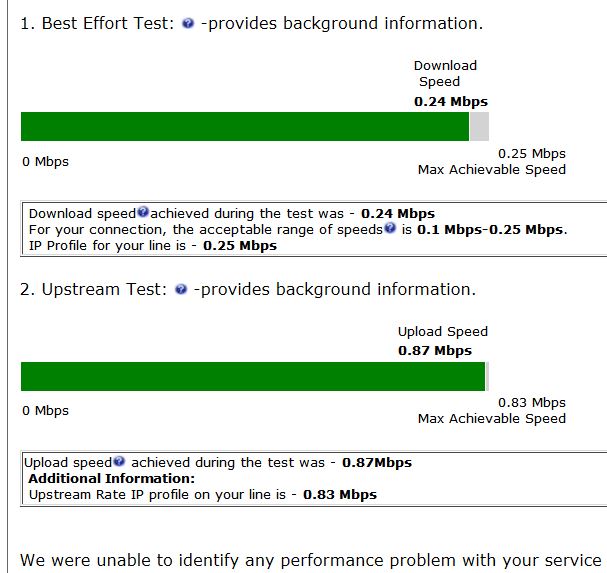 You should be getting between 9 and 16Mbs connection speed.

I would suspect that you are in a banded speed profile at the moment, so you will have to leave the home hub on all the time, until the speed recovers

Ok, but (and it's big but), why has this suddenly happened ?.

using BT broadband. Initially the download speed was about 2 Mbps and then

over the years went up to a reliable 8 or so. And all the time I was using a 3COM

modem/router and switching it all off at night.

a couple of hundred yards away and the phone line was dead for about 4 days.

There may have been something that has upset the connection, that you were unaware of.

Leave everything alone for now, no resets or disconnections, even to do a speed test.

Just ignore the step where it tells you to restart the home hub.

It should correct itself within 10 days.

Meanwhile I will ask one of the moderators to take a look at your connection from the remote end, as that gives a lot more diagnostic info.

I'll be able to take a look a at your connection and run a few checks on your line. Please can you send me in your details using the "Contact The Mods" link found in my profile?