@legitimise_sailing wrote:
My target SNR margin appears to be 6, from the modem stats after a reset. I wonder what yours is.

Cant view my SNR on my ECI hacked modem, 4500ms interleaving delay on download and 1500 on upload -.- looooooooong way to recover from DLM

I guess they declined it, no surprise there. Would have thought they would atleast approve it seems I now have a brand new line put up between 2 poles and a new line route to the cabinet

Maybe they should have requested a profile reset?
--
To say thanks for a helpful answer, please click the white star
0 Ratings

I thought that technically was the same thing as SNR reset? Just two different ways of wording the same process?

@john46 wrote:
A profile reset refers to an IP for file reset whereas an SNR reset is just what it says a noise margin rest

Thanks for clearing that up john, how long would you say it will take for DLM to begin to increase my profile? I am now positive that my line problems are over as I've not lost connection in 4 days which is the longest sync time I have had since having infinity installed over a year ago, I have access to my modem stats and so far have only noticed a slight reduction in the interleaving delay on my upload speed and 10ms decrease on my ping. Nothing has changed for the download speed as of yet but I remain optimistic.

There is no way that an SNR can be reset,because it is a "Signal To Noise" reading that is in all wiring,including electronic devices that are linked by any means.

It is just a reading that indicates that there is maybe some EMI [Electro Motive Interference] that is causing higher noise ratio`s than is needed in the cables or wiring.

SNR is good at about 6db to 8db,but if it goes too high then the insulation of the circuits or cables may be breaking down.

I think that maybe SNR, SNRM & Target SNRM are being a little mixed up here.

A high SNR is good (the closer to 70dB the better).

This is from my connection where SNR is not great:- 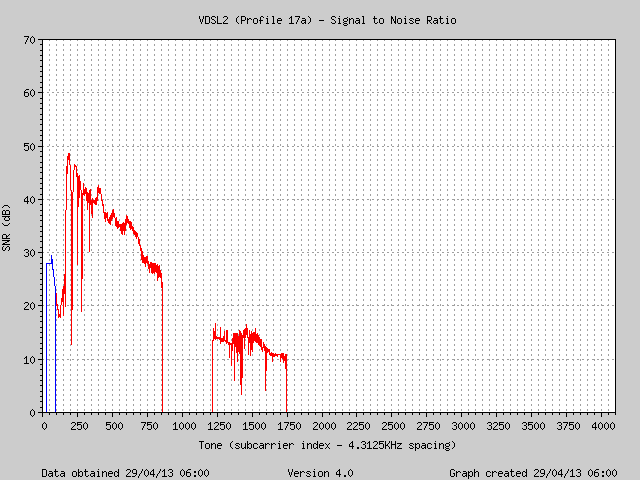 This is from another connection with better SNR than mine:- 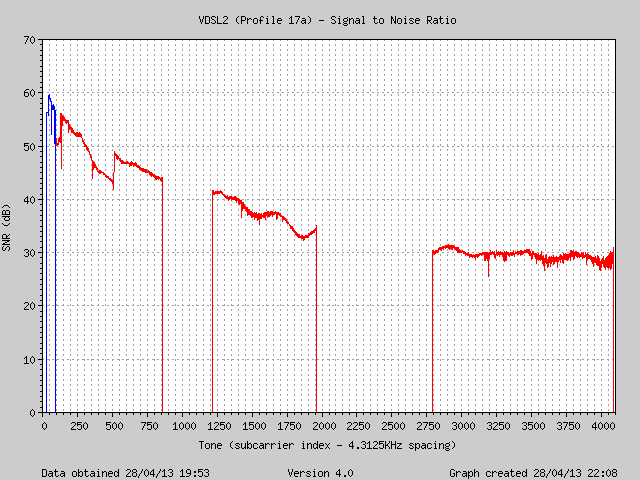 SNRM is the variable spare margin that will allow for fluctuating noise levels without causing disconnections:-

My connection's SNRM tends to remain steady all the time, indicating that noise levels don't vary much:- 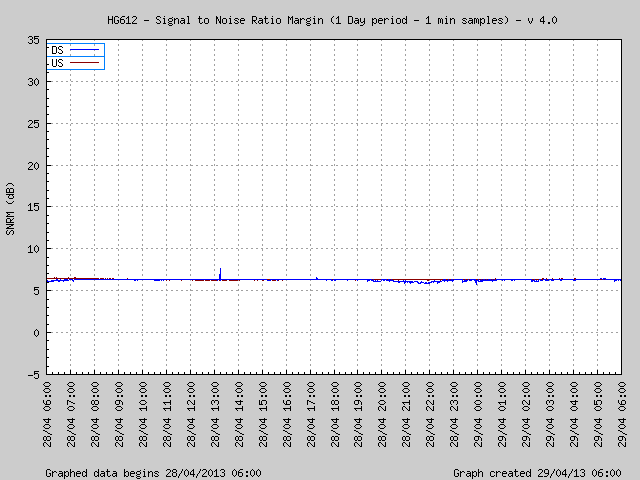 Target SNRM is the typical difference set to allow for lines where noise levels do fluctuate.

The target for FTTC connections is 6dB.

This will allow for drops in SNRM of say 4dB or more at times the connection is suffering from increased noise.

I believe that on ADSL connections target SNRM can be tweaked upward or downward to increase stability & speed respectively.

Setting a target SNRM of say only 3dB will increase speed, but will induce instability on those connections where SNRM drops by 4 dB.

Target SNRM tweaks are not available to users for FTTC connections as this is all controlled at the DSLAM.

I believe that BT can adjust this for their fast, standard & stable FTTC profiles on a user by user basis, but we haven't really seen any evidence to confirm they actually do implement it.

A DLM reset is the usual mechanism which returns a connection to its 'as installed' wide open profile with all restrictions removed.

If a reset connection needs interleaving, delay etc. it will be automatically applied again - usually after a couple of days.

When SNRM exceeds 6dB on FTTC connections it can be a good thing (meaning there is lots of spare margin to allow lots of noise before reducing high sync speeds).

I have seen 30dB SNRM on a connection with attainable rate of 136 Mb, but running on the capped 40/10 service.

It can also be a bad thing, meaning that speeds have been capped at a lower level than the connection could actually achieve.

I have in the past seen SNRM at around 18dB on my own connection when it was capped at 15Mb sync speed during  the period before physical line faults were fixed.

I did also see it at around zero during the same period (occasionally less than zero), before DLM actually capped sync speed:- 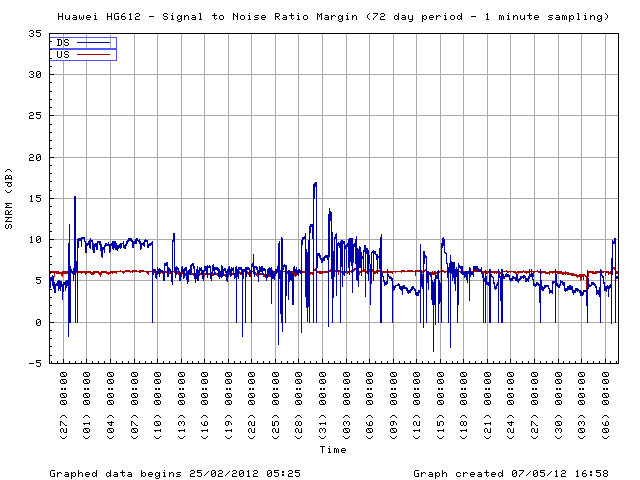 I pretty much agree with Bald_Eagle there.  Just one quibble/clarification

Target SNRM tweaks are not available to users for FTTC connections as this is all controlled at the DSLAM.

That is true, and the main 'controller' is the DLM.

DLM controls it in various ways automatically, and I think that Target SNRM is one of the key parameters that it uses for this control.

One extra confusion is that 'resetting profile' is used for both 'resetting DLM profile' and 'resetting IP/BRAS profile'.

* 'Resetting DLM profile' is the commonest usage, and I'm 99% certain what OP was meaning.

* 'Resetting IP/BRAS profile' is usually done by router disconnect/reconnect to force the PPPoE connection (which the user can do), but it seems there are sometimes errors in the BRAS controller (or its database) that mean a manual force is needed there too.

The confusion is increased by the face that most people can't see their modem details; so the only manifestation they get of a DLM reset is a change in IP/BRAS profile.

0 Ratings
Related Topics
Re: Possible reset SNR
Re: SNR reset
Re: Can i get my SnR reset back to 6db please?