Significant fluctuations in Infinty (2) speed and crackling on line.

Hi there folks, hope your all well.

I'm new on the forums as a friend of mine suggested it was the 'place to be' and that there are people here who will solve all my problems! (living in hope) 😉

Any ways, I will explain.

Firstly, I live with my parents, my dad pays the bill... I engage in allll the technical stuff... All of it.

We have had Infinty 2 since it first came to our village approx 2years ago January 31st.

We were sent a letter saying our 'average' speed would be 56Mbps out of a possible 79Mbps.

(Just to clarify my thoughts, the term 'Average' means 'more often than not', if you dispute this, then feel free but please explain why).

On day one, setup/installation, we were getting 75Mbps, by the time i returned home from work that had dropped to 65, and further down the line, say after the first 10 days 'settling time' we were getting around 56-58Mbps. (To be expected in respect of the above mentioned letter).

The average speed as per the letter was achieved for quite some time, say about a year or so, at which point we began noticing fluctations. Drops of nearly 50% were noticed. I got in touch witth technical line and things were sorted.. To a degree!

Since then we have never acheived higher than 50Mbps.

I do however fully appreciate that uptake of a new system in the locale will increase as more customers become aware of it and too want better broadband speeds, and i think this has caused most of the problems... The infintiy cab in our village is over capacity and i believe this is possibly one of the main causes of issues for all concerned.. (I do speak to a few of the other villagers in the local pub who are at the end of their tether.. Like Me!)

As i stated in the 'Subject' above, we also have crackling on the line, But usually when someone rings us not always when we ring them...  Now this is where my tech head comes in... Surely when there is noise on the line this would affect Broadband drop outs... more noise = no BB at all.. but this doesnt happen... If I do a quiet line test there is nothing.. complete silence..

I thought it was our BT 6500 triple  set of cordless phones which were to blame but they are only a couple of years old... and should not be at fault... So, I got a 'corded' old school phone and plugged it in the extension... Any time some one rings I now commit to a test of, If there is noise on the cordless , I ring them back via the corded phone... Just to see if there is noise on that, and then record the results on a note pad.. I may even get them to ring us twice and answer via both phones one after another in way of expanding on the test... the results as far as i can tell mean the phones are not to blame at alll..

Does this then come back to the fact that there is not enough space in our village cabinet foir the whole village and the possibilty of crosstalk etc..

God forbid the 128 houses which are planned to be built in the village over the next couple of years.. What then... should i get out my two baked bean tins and piec of string.. It may well work better.. Sarc.

Further information to any one who would like it...  I have started my own Home pc repair business, I built all our home computers and administrate all tech stuff in the house..  I have replaced all Cat5 cables with 6a shielded cables, where there are Powerline adapters I have read reviews till me eyes bled before making purchases and also swapped their cables for shielded ones too..  Our internal home network runs at 1Gbps... far superior to the up n down 19 - 50 Mbps that trickles in near the front door... I even replace all our laptops wifi cards for the latest versions to gain use of wireless ac tech.

I am saving money now to buy a spectrum analyser so i can get a mate to drive me around the village and i will map all forms of EM radiation/interference.

I really am not sure now where im going with this.. as ive forgotten how i started.... Never the less, whats next? Applying for a job at BT or shall i just go buy a real of fibre, dig up a trrench to the cabinet and then call BT when i've laid it to get it connected?

Someone please help... Before i really lose it.. or maybe just whats left lol !!!

All replys are welcomed..

the speeds BT quote are conenction speeds not download speed

Hi there imjolly, thanks for prompt reply,

As i said above, i have already done quiet line tests (17070) (from both phones cordless and corded on main socket and extension).. Always silent.

We dont use a microfilter as we have the newer split/filtered socket. And i have done tests from the test socket before, however im not going to get down on my hands and knees again, Ive just had my sunday roast. 🙂

BT can send an engineer round for that.. at their cost..

In anycase..  here is 1-12 .. they hide this well, didnt even know it existed any more, why not put it on the main pages like it used to be?!

And as regards the wholesale fttc test, i did one earlier.. and saved as a png file. How do i upload it?? 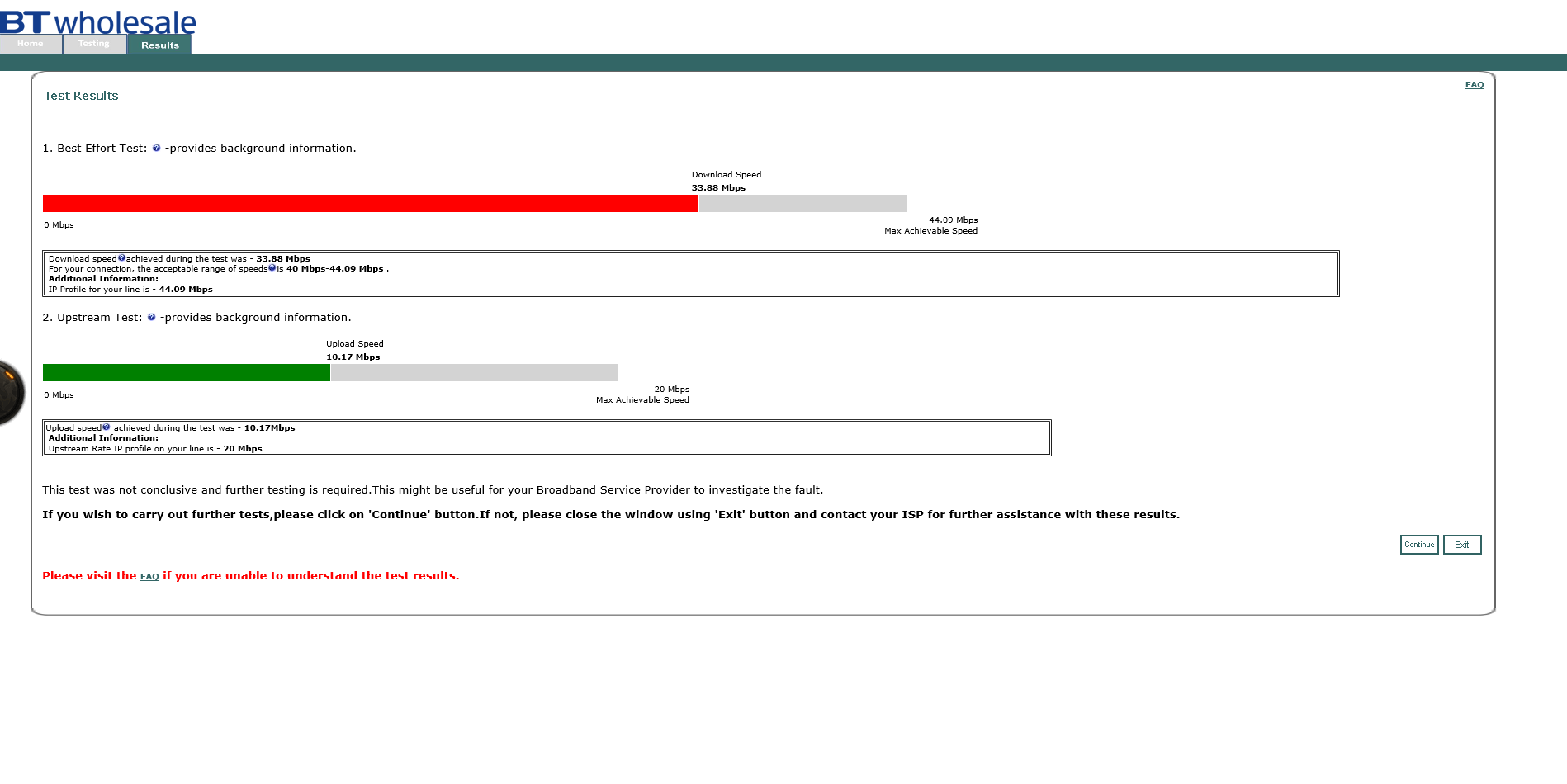 If you zoom your browser page you will see...

Also you will see that the test results are well outside the acceptable range..

was btspeedtester done with a wired connection direct to the router and not wireless or using powerline adapters?

as you have had a 45mb connection speed for 2+ days are the fluctuating speeds in initial post therefore download speeds?

I always do testing wired.... As I said before, I have my own business in home computer repair and troubleshooting.. I wouldnt even bother doing a test on a wireless connection..

And as i said, I am aware that the local cabinets are full to capacity, we have 2, one is BT the other is 'connecting cambridgshire' or some subsidised **bleep**..

And if it is the fault of BT then they need to pull their finger out or we should get refunds..

I will do the other tests tomorrow and post then..