Quote from @PBS83 "When all is considered, it's effectively been created primarily for BT customers because there really isn't much point in it otherwise. Sky, Virgin and TalkTalk customers have access to the stand-alone channels and on Sky, Main Event is only available with the full Sky Sports package. Offering the channel to BT fulfils the requirement of making Premier League football available and they can also claim to be offering a range of other sports, including England cricket. It's nothing more than the latest move in a nauseating game between Sky and BT".

This is what I alluded to a few days ago earlier in this thread. It's obvious the channel was only created for BT and to enable Sky to fulfil their obligations.

In recent days a good few of my mates have considered cancelling their entire BT subs and going back to the competition, with some even talking about ditching Pay TV altogether for 'other' means of accessing their sport etc.

Sky are just not happy that a rival company like BT has come along to try and take them on.

Sky just seem to want there own way at times in my opinion.

I know BT is not 100% perfect but I would rahter be with BT than Sky.

I like parts of what both companies do in some aspects and in others, I don't. When all is said and done, they're both extremely large companies who are out to turn as much of a profit as possible. BT are seen as the nice guys in town, whereas Sky are seen as the bad boys... it's all pantomime.

The fact is that they both have the same aim of hoovering up market share and locking people into long-term contracts and sport is seen as key to that.

The unfortunate people are those that have zero interest in sport.

That last part in particular is important. I'm one of the people who firmly believe that BT are now confident enough in their own product to not kick up a fuss over Sky Sports. When they were still a very minor player, or even as a new entrant, in the sports market, they had everything to prove but now they've got a share of football coverage, the playing field has changed. We all know that Sky Sports still has a lot of the 'prime' content but is BT Sport offering a varied enough quantity of live sport for people to be happy enough with that alone? I think the answer is 'yes'.

If you want all the sports, i.e. all Sky Sports, all BT Sport, you wouldn't be with BT anyway. I think the offering from BT is currently attractive enough to keep those people who just want access to some live sport, at an attractive price.

I don't think they have any intention of taking Sky on for the majority of live Premier League matches, but if they did we would soon see BT Sport prices rise.

I don't think they have any intention of taking Sky on for the majority of live Premier League matches, but if they did we would soon see BT Sport prices rise.

That would be my one concern going forward. If BT are content enough with the share of EPL games they currently have then I think pricing would remain competitive. If, however, they were to gain a higher spoil of those games, then you would expect the price to rise. That in itself could become a deal breaker for BT.

If you want all the sports, i.e. all Sky Sports, all BT Sport, you wouldn't be with BT anyway. I think the offering from BT is currently attractive enough to keep those people who just want access to some live sport, at an attractive price.

Absolutely, even though BT only have a small share of English football, it's enough for me, there is always Match of the Day on a Saturday/Sunday. They do impressive coverage of Champions and Europa Leagues which for me makes up for the lack of EPL. I personally feel they've enough 'other' sport to dip into on occasion which is more than enough for the small monthly outlay from my pocket.

Pricing for me is all important and pound for pound I feel BT gives ME better value for money overall than jumping ship to a competitor.

I got Sky Sports 1 and 2 so I didn't miss a ball of England test cricket.

England start a test next Thursday with Thursday and Friday being shown in full on the Main Event channel. However on the Saturday they are not showing the test match until 2:30pm !!!!! Why can't they show it on the extra channel ?

As BT have the ashes very soon I will be cancelling Sky Sports after this test series. 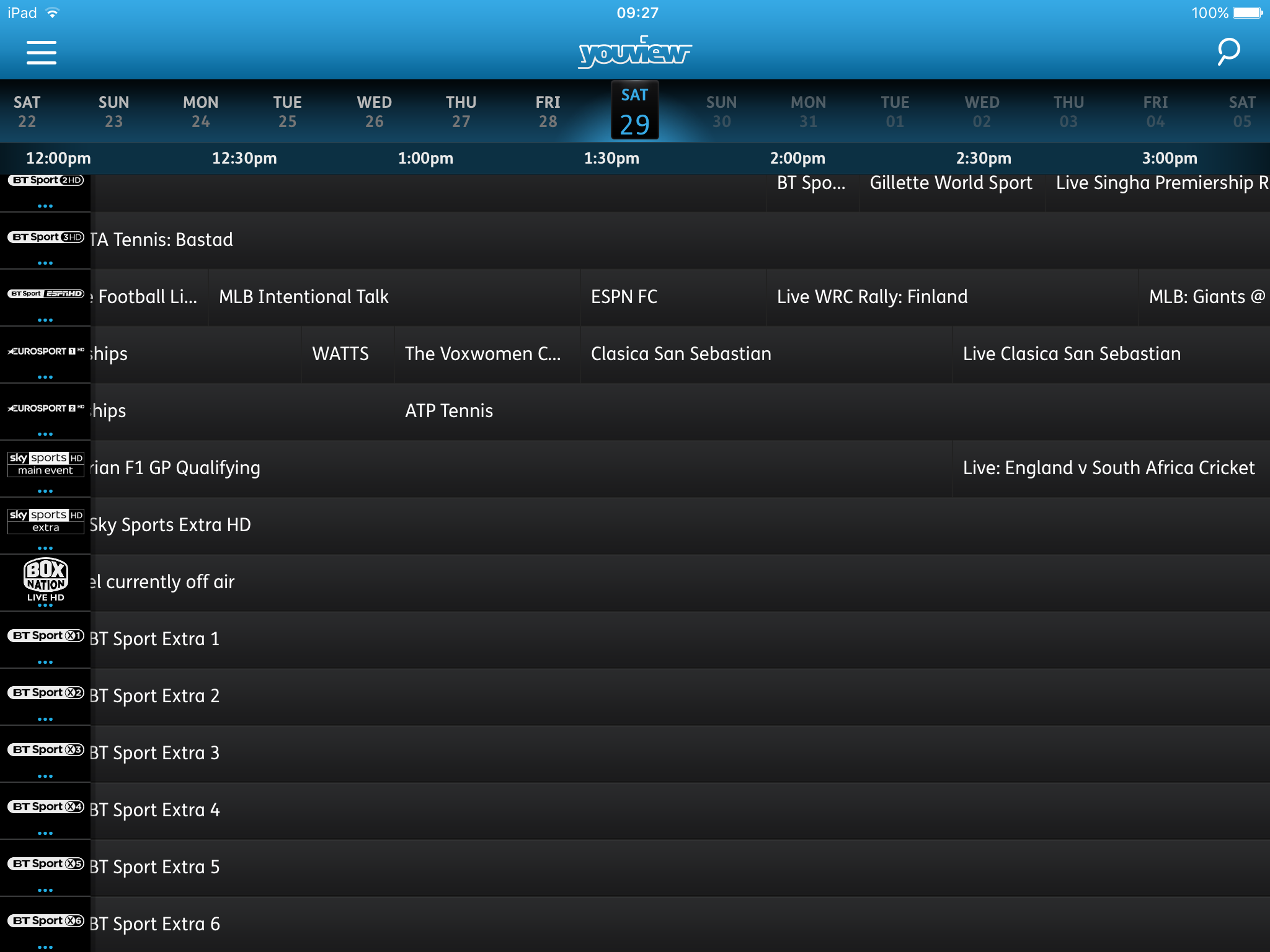 I posted the times for the cricket a few days ago. Two full days coverage and two part time days coverage. Other sports (darts for one) getting the same sort of treatment in the coming weeks.

I've been keeping an eye on other forums as well as this one and I'm sensing a mood change in reactions to these negative changes. There are more people now seemingly prepared to just dump Sky Sports off their Youview package rather than jump ship and go to Sky for everything. Like you say, why can't this 'Extra' channel not be for more than just EPL overspill? It could still be kept as a part time channel if only to accomodate instances such as that highlighted in their cricket coverage.

MadRob wrote: Like you say, why can't this 'Extra' channel not be for more than just EPL overspill? It could still be kept as a part time channel if only to accomodate instances such as that highlighted in their cricket coverage.

Totally agree. As much as I don't like Sky's attitude I can't help but think BT are to blame here, after all if TalkTalk, another Youview provider can supply all the SS channels for less than BT charge for 1 channel, that suggests BT want to wind down their SS offering.

At the end of the day though, I want to be able to watch Premier league games and cricket & wouldn't mind some F1 & golf too so will go with whoever can provide that. I will probably use NowTV as a stop-gap until my BB/phone/TV contract with BT is up and then switch everything to either Sky or Virgin.

I've been with BT for decades but their arrogant attitude towards customers with Sky Sports has made me look elsewhere.

Go to solution
I'm currently listening to the Open on 5 live and thinking to myself, why is the WBA v Palace game not on the extra channel? Of course, we all now the answer, this is all part of the plan by Sky to disrupt BT viewers, in the hope they well move to them.
0 Ratings

& now an increase to £27.50.  Has anyone looked at the so called extra channel we now have (Sky Sports Extra)

I am a big football & rugby union fan, but having to pay for 1 channel & so called BBC red button type of broadcast i will be cancelling my deal for Sky services come end of september.