Just a bit of background about my issue that I hope someone can assist me with.  I have knowledge of ADSL and PSTN lines, which makes the problems i've been having reporting this problem to BT even more frustrating.

My line is fed by an EO cable, so our broadband speed has never been great, around 4Mbps - 5Mbps when it's working at it's best.  Over the last few weeks I noticed the speed starting to drop and downloading things (Sky On Demand, etc) began taking longer or streaming TV started experiencing issues.

I carried out some speed tests using speedtest.net and the BT Wholesale tool and could see that the speed had dropped to around 2Mbps, with occasional tests dropping as low as 0.5Mbps.  Eventually the speed dropped to 0.5Mbps all the time.  I decided to install an NTE5 directly at the point where the line entered my premises and removed all internal cabling to carry out tests.  The tests were the same there, ruling out any internal factors.  I also carried out the further diagnostics on the BTW tool using the speedtest login details on the hub, this came back saying i should report the issue to my supplier as the line was performing below expectations.

I contacted BT last Sunday 15th via echat and spoke to a very helpful guy who tested the line and asked me to perfrom a couple of speedtests on the BTW tool, which I was already able to provide the results of.  He advised that an Openreach engineer would be required and booked on in for the Tuesday morning.  The engineer arrived and his tests showed very high CRC errors racking up on his tester.  After a bit of back and forward he decided thar the issue lay on the overhead cable between the two poles on our property and moved our line onto a new dropwire that had been installed when our neighbours had a similar issue.  He advised he was seeing no more issues and that it may take 24hrs to settle down.  Fair enough.

After 48 hours the speed is still all over the place, down at 0.5 Mbps and going no higher than 2.5 Mbps at best.  The BTW tool now shows a line profile of 1.2 - 3.5 Mbps.  I contacted BT again via echat on Thursday night (19th) and spent 2 hours trying and failing to explain my problem.  The person I was speaking to seemed to have very little understanding of broadband and was steadfastly sticking to their script (asking numerous times if it was wireless or wired devices, even after I had repeatedly explained it was an ongoing issue).  So, after 2 hours I was told that it was an internal cabling issue, despite my best efforts to tell them that there was no internal cabling and the router was plugged directly into the NTE5 test socket at the point the line entered the building.

At this point I asked to speak to a manager, and was put on to a supervisor.  They promised to call me back at 10pm.  I eventually got a call at 10:30pm and they advised me that they would look into it and call me back at a time of my choosing the following day.  I asked for 7pm.  7pm came and went and eventually I got through to someone on echat at 8pm who managed to get the supervisor from the previous evening to phone me.  They promised me this was being looked into and I would either get a call back that evening or Sunday.  I have also asked this supervisor if I can email through screen shots of speed tests I have carried out over a period of time to show the speed issues I am facing, but have been told that this is not allowed.

No call came that evening and nothing on Sunday, until my wife recieved a text message from BT advising the our issue had been passed to a "special monitoring team" and that they would call today (Mon 23rd) between 14:30 and 16:30 and could we make sure we were available to carry out tests.  She text back advising that time was not suitable and could someone call after 7pm.  This morning she has recieved another text reminding her to be available between 14:30 and 16:30.

I'm very sorry for the hugely long post, and I'm trying to not sound like I'm having a rant at BT for the sake of it, but I find it astonishing that, as someone who has more than a passing knowledge about what I am talking about, I have had such a problem getting BT to understand what it is that I am reporting and that no one appears to look at the previous fault notes to see that an engineer was out, but that the problem was not fixed.

Does anyone have any advice on how to actually get the right people to look at my issue?

My broadband is really slow and I can't get BT to fix it.  Any help?

I'm sorry you're havinmg so many problems getting this fixed. I'm sure we can help. Can you run the sped test including the further diagnostics and post the results? Can you post your helpdesk details? You'll find them in Troubleshooting/Helpdesk on the web interface at http://192.168.1.254 or http://bthomehub.home.

Thanks David. I'm not at home at the moment, but I will certainly do that once I get home after work tonight.

Thanks for looking at this.
0 Ratings
Highlighted

Typical, I run the tests tonight and they're nowhere near as bad as they have been, but this has been happening and the speed is up one minute and down the next:

I did get a call from the helpdesk and the chap said that he was manually going to set the profile speed on the line as he could see it was not going to go any higher than 2Mbps.  I've included a couple of the tests from when the line was really slow below, more for my own sanity than anything else: 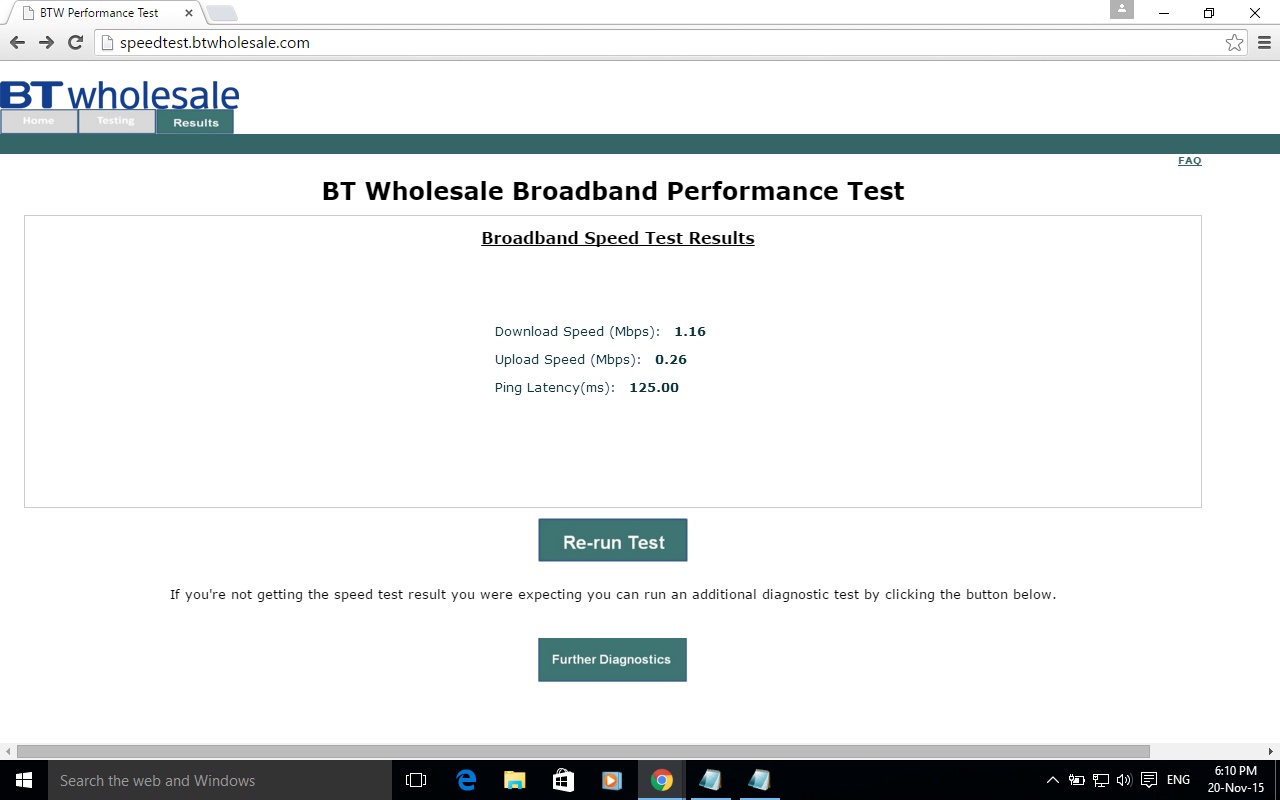 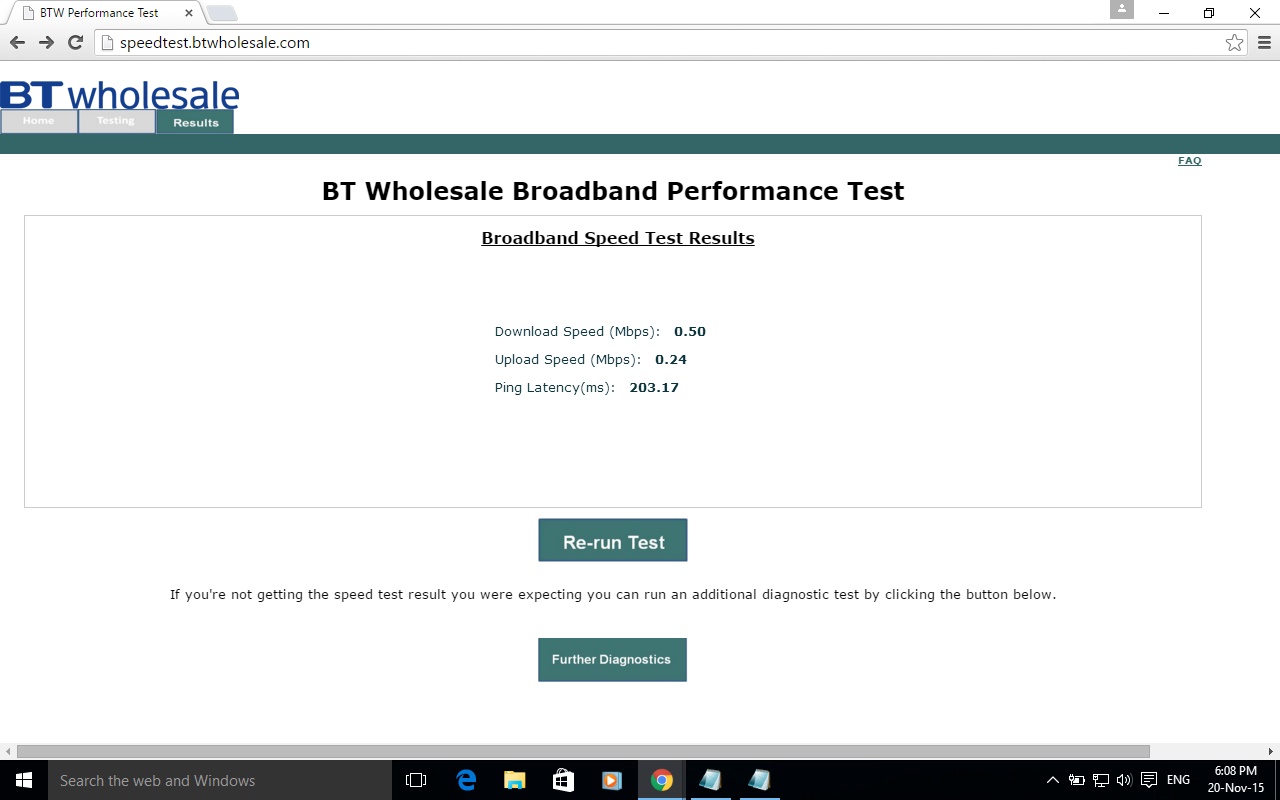 Can you go back to the hh3 and post the adsl stats. http://www.kitz.co.uk/adsl/frogstats.php

Whatever the gut that called is doing is having an effect.  I'm not sure if it's positive or not just yet.  The speed is improving but the connection is dropping.  To be fair he did say that would happen.

My concern is still the CRC errors racking up.

Another snapshot for comparison after 5 minutes or so

You have a high number of uncorrected errors (CRC errors) because your latency is set to fast, which means that there is no Forward Error Correction.

CRC errors will reduce the download speed considerably, as each error forces a re-transmission.

There are also a large number of errored seconds which would indicate a poor quality line which is picking up noise from somewhere.

If the latency was interleaved, it would reduce the CRC errors, but the errored seconds are more of a concern.

I think you have been upgraded from adslmax to adsl2

This is with the HH3 that I've been using for testing purposes connected to the test socket of the NTE 5 i've installed where the line enters the building, removing all internal cabling from the equation.

This would indicate to me that any errors are happening before it reaches my premises?

eta:  I've now put everything back in place and am now connected with my HH4 downstairs again.  I figured if the connection needs time to stabilise it's better being connected up as it would be normally.