I currently pay for BT Infinity 1 broadband, which has been provising a very slow download speed of 0.3 Mbps since August 2016. Previously, it used to provide a few Mbps.

The origin of the problem may be related to a failed installation of BT Infinity 2 FTTP, which is listed as available for my house. Unfortunately, after I ordered this, BT failed to install it (and they cancelled 2 engineer visits without notice while they were in the process of failing to install it).

I have contacted BT Order Management twice. Each time (August 2016 and 19 November 2016), I have been told that they would call me back after investigating the problem. Unfortunately, while they did call me back within a week or so of each occasion, they were only able to say they were still investigating the problem and would call back again. And they subsequently have not.

I have also had a number of fruitless conversations with BT's staff in India and via their chat system.

Can anybody suggest a method to hurry along BT's efforts in solving the problems of (a) very slow broadband, and (b) installing the Infinity 2 FTTP that is advertised as being available to my phone number according to http://www.dslchecker.bt.com/

I am copying the recommended speed test and home hub router stats below. In these, it strikes me as odd that the speed test claims a max achievable speed of 0.25 Mbps, given that BT are happy to take my money for an Infinity 1 connection. As I mentioned above, I used to get a few Mbps via the same line. 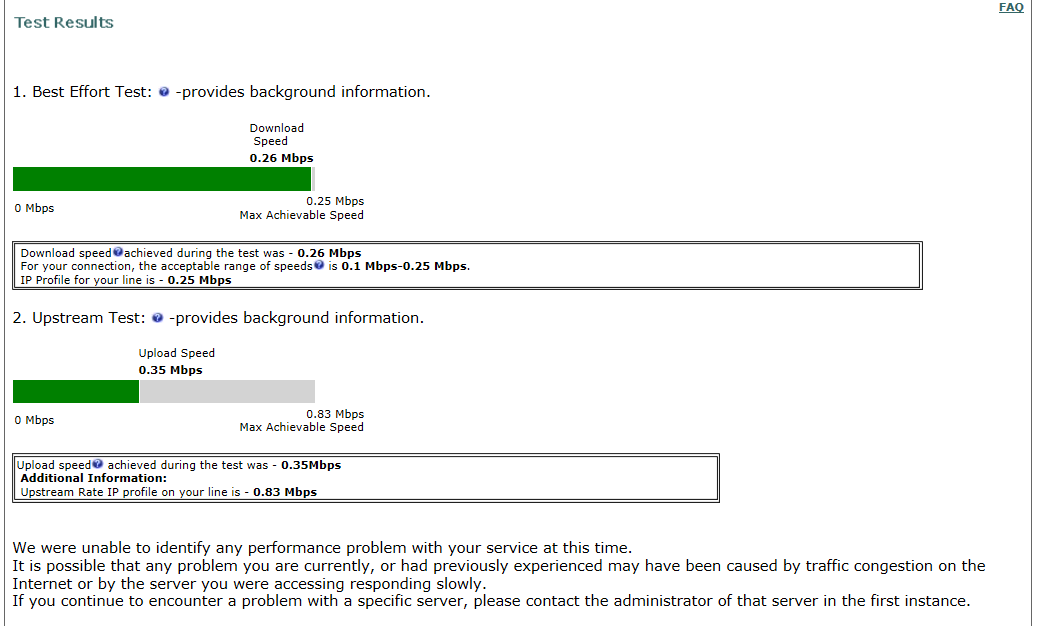 That is not an Infinity 1 connection, it is ADSL2+

You are on adsl 2+ standard copper broadband not FTTP can you please post the results of the checker so ewe can see the services available to you http://www.dslchecker.bt.com/
0 Ratings

Certainly, thanks. Please find attached two screengrabs. One is from the dslchecker site, and lists WBC FTTP as being available to my line. The otheris cropped from my latest bill, which shows I am being charged for BT Infinity 1. 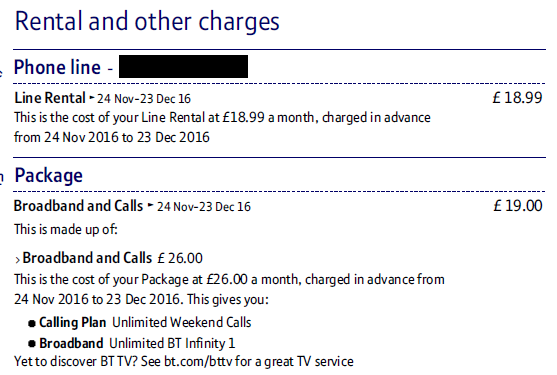 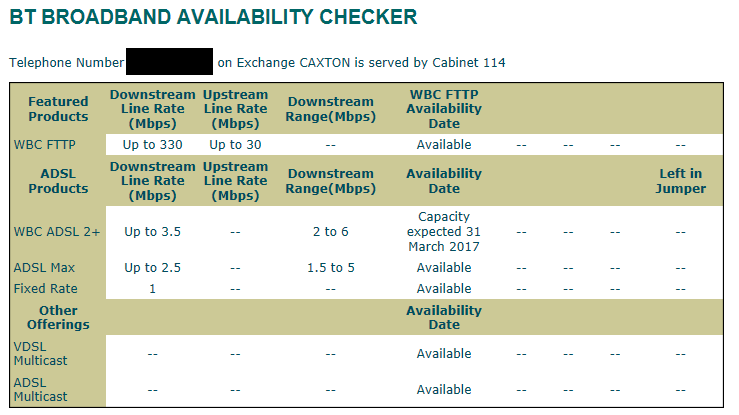 john46: I expect the fact that one part of BT bills me for Infinity, while another part thinks I have ADSL 2+, is part of the reason why the FTTP team redirected me to the Order Management team.

If I may return to my original question. Can you suggest the best way for me to hasten the BT Order Management team in addressing this problem? One way would be to call them up again: but of course they informed over the phone that they would need a week or so to resolve the problem (which is reasonable), and then they don't get back in touch.

Hopefully one of the mods will see your post and pick it up.

Thanks for your posts and welcome to the community forum!

Sorry that you're having these problems.  I understand that you've been in touch numerous times and you're still no further forward.  You can get in touch with us and we will give you a hand from here.

After a number of further calls in December 2016, an engineer was booked to install my fibre connection on 11 Jan 2017.

Now I have received conflicting messages about this appointment. A person from BT Openreach called me on 6 Jan to tell me they were cancelling this appointment, and he also told me that a colleague would call me back to re-arrange it. (He did not seem at all apologetic, and I have not been called back yet by either BT or BT Openreach.) And now on 8 Jan I have received a text message from BT telling me that my engineer will visit on the morning of 11 Jan, and that I need to be at home.

Clearly I will need to waste yet more time contacting BT to find out which of these messages is correct.