Space or no space?

Me and my partner have been trying to get broadband and having massive issues with Openreach.

Basically, we've been trying to connect for a month now. We've tried BT, and two other providers... no success...

Each time we tell them to check whether cabinet space is available and they say yes it is, then come back calling us a few days later saying nope must have been an error. However, when we check online it obviously shows as available! We've been told by BT and Vodafone to check other companies as other ones might have allocated space - which is a complete lie as we looked it up and BT Openreach does NOT allocate space to Broadband providers.

We've been messed about, lied to and have been sold things that supposedly are not available. We're fed up with it by now, and no idea what to do. Tried raising the issue through Vodafone and telling them to contact Openreach and they only came back with 'whatever, can't do anything, guess you're stuck with no internet, bye'.

The image is from BT broadband checker from today, the same day we've received a phone call from TalkTalk saying there is no space in the cabinet, even though it clearly shows up as available.

@kirakira I've removed the image as it had your address details and it's best keeping that info off the public forum. You are welcome to repost the image with your address removed.

According to the results you initially posted it does state there is availability but the address checker is not the most accurate way to check as you get a much more accurate result by using a telephone number and it is quite possible that an new line could be routed to another cabinet with no capacity.  As your order has been submitted by another provider they will need to make these checks for you with Openreach as they may be able to clarify further as to why the order for fttc can not be fulfilled.

Hmm, I've tried checking it with a phone number we've been given and it doesn't work so not sure - address check seems to be the only way to do it.

The thing is though, we want to go with BT, however when placing our second order (after failing the first time for discussed reasons - lack of space, then told it was an error on the system), we've asked for cabinet space to be checked for availability before agreeing again and we've been told it's fine. After the order has been cancelled again, we've been actually told to try different providers as "they might have allocated space we don't have"... I don't understand why we've been told that, and why nobody looked into the problem in the first place...

It's just been incredibly frustrating for us, as we're told different things each time and clueless as to what to do. We're kind of stuck in a limbo, being told space is there then later told it's not.

Is there any way for us to get broadband? I'm a student at uni and a lot of my coursework is completed online so need the connection.

Edit: reposting image with no address on 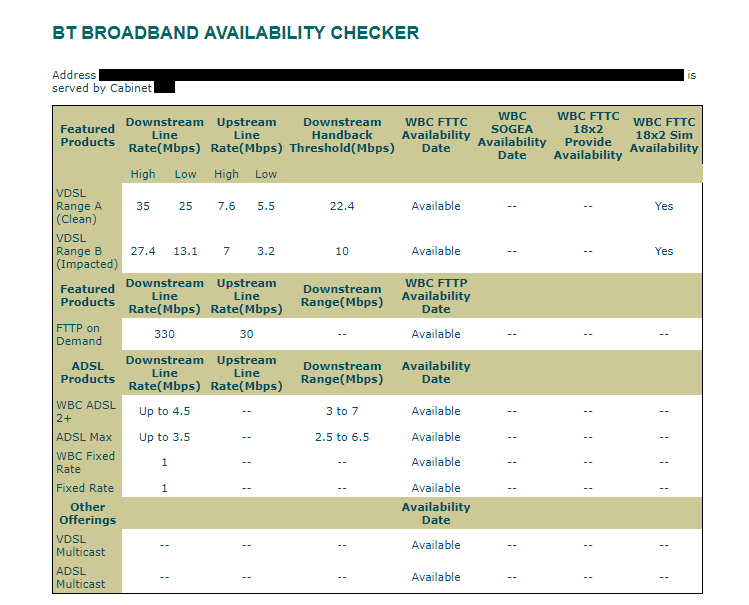 @kirakira I can appreciate that and I'm sorry we couldn't provide you with your requested service.  If three ISP's have all said there is no availability then this is likely to be the case and the address checker is not giving the correct results but you can check this by contacting Openreach directly on this link.

If there's no fibre capacity the alternative would be to go with ADSL broadband instead which won't be as fast.

BT Infinity is only a VDSL connection supplied and marketed by BT and is exactly the same technology as fibre connections from any other provider.

Just to clarify, if we get ADSL broadband from BT at our place, would we then be able to easily upgrade to fibre once it becomes available? What is the upgrading process from ADSL to fibre like?

Yes, it's a simple process of ordering it and an engineer visiting the cabinet on activation date to connect your copper line to the fibre cabinet.
If you want to say thanks for a helpful answer,please click on the Ratings star on the left-hand side If the the reply answers your question then please mark as ’Mark as Accepted Solution’
1 Rating