We've a lot of cross talking, after FTTC was pushed ADSL errors and disconnections went through the roof on my street.

If this answered your question please click "Mark as Accepted Solution" below.
0 Ratings
Highlighted

Bullitt, mine used to be like that too! Then something changed!

Roger, stats are as follows. 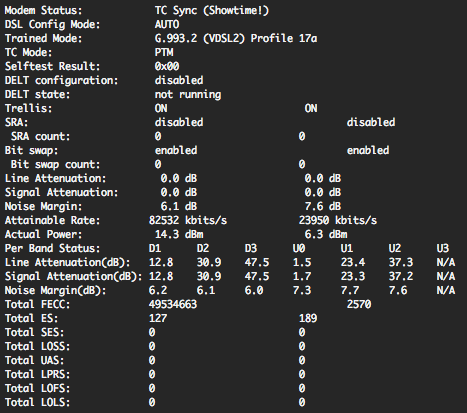 What's your linerate at the moment?
0 Ratings
Highlighted

The cyclic redundancy checks are saying that you are having to resend a lot of packets, which does absorb overhead, as you;ll know.

And interleave allbeit is not at a profound level, but it's fairly deep, (9msec latency) but the line's running roughly around target margin.

There's 2 ways of looking at it ... it's either about to keep improving, because margin is near or at target, and holding its own with the interleave depth, and it's been a weather related or environmental issue of some sort (perhaps)..... or .....

It's tried increased margin before and deepish interleave because of big increases in noise, and it's now decreasing margin, as it would do (for the sake of linespeed) ... and will also decrease interleave depth as and when the line errors decrease.

Because of that ... I think it may be more to do with corrupted packet handling at the dslam, rather than line noise induced errors .... which would, not necessarily prove it ... but suggest cross-talk. Simply because line errors tend to imply a deeper level of noise control (heightened margin, which reduces linespeed as you'll know)

But I'm not saying you're misinformed about the interleave/on/off issue .... but looking at the level of error correction, if you had it turned off (or could), I think it would fight back by upping margin to a point that would really limit the sync rate and line profile.

In fact, if it rose to beyond 15db, it's like ADSL2+, you'd probably find it banded, with a max and min value installed for the sake of stability. Also, I don't know, but I'm guessing your ideas/logs to BT etc. fell on deaf ears simply because the first priority, has to be network protection.

Just my two penneth. But probably not what you wanted to hear.   🙂

@Bullitt wrote:
i think its the linecard/port/thing in the cab
those speed variations are too wide to be normal

Well again ... al that is, is DLM trying to find and impose a stable condition, but with the premise that it's the fastest possible connection for the line condition at the time .... and if it is up and down, as traffic goes up and down, that in itself goes maybe even further to substantiate the cross-talk possibility .... although in BTo terms, the levels may fall within acceptible criteria .... but who knows?

Thanks for that Roger, you've come to the same conclusions as I have, and pointed out a few things I hadn't thought of - so thanks!

Allthough, the line hasn't disconnected for over 3 days now, the level of CRC errors aren't that major, going by BT's requirements (I think it's 2 per minute) so it's on target if this is the case.

I just don't understand why it was absolutely fine for 2 + weeks though.

But thanks for your time on theis gents, I guess I'm just one of the many who can add their name to the speed issue list. 🙂