Been a while since i've had to jump on this forum for some community advice as i'm at witts end with my predicament. So to give some brief history I have had Infinity since it's conception in my area which I was very happy with, then came Infinity 2 I upgraded and had been happy for a long number of years until this year, where I have hit a stumbling block with BT support and complaints and am now at the point of pulling the plug and going to Sky or someone else as the customer service support has really excelled in being as far as non-existent. My issue currently is i can get maximum 45-50 mb/s on a line which very early doors got to 92mb/s down (training stages) but averaged between 72-76 mb/s which was stable for a very number of years, alas with the 19 mb/s upload which has always been consistent.

My issue started with my white open reach VDSL model (I was using HH3) which worked tireless until the power plug for the OR modem failed (noticed as i had not internet), during my triage I noticed the OR power light going on and off. So, armed with my NEW replacement power supply for the OR modem every seemed to power back on nicely but the speeds were somewhat shocking which I can only assume was because the BT network has seen a fault on my line (power cycle modem) and tried to correct it  and ever since i've not managed to get the IP profile above 60mb/s this started in February 2016 this year. So I turned to support and was told the OR modem had failed and as the Smarthub 6 was just released I could have one of them for a little cheaper than retail, so i obliged thinking it would solve all my problems i've only ever managed to reach since it was installed Infinity 1 speeds I assume now because my line is locked in some kind of faulty state.

I've lost count of how many support tickets have been raised, as even the online speed test reported a fault on the line but they got raised and then closed with no interaction or advice, spoken to web chat on the phone and all threaten me with a heft engineer visit cost if they decide it's not their fault which i'm not willing to risk - ive gone through complaints and having persistent to almost harrasing calls and text messages annoyingly asking me to do the same thing, and then doing the same steps to try and fix wait a few days and they will call back.... c'mon there is only so many times i can factory default a box, disconnect everything, disable wireless, plug direct into the box - i just feel like i'm wasting mine and BTs time. And then when they speak with their 'manager' they give me the distance for the exchange and it will never go faster blurb.. considering i had what was promised for 3+ years concurrent, nothing has changed, no wiring everything underground - i have the cabinet half a mile down the road and the local area master exchange building behind my house i struggle to understand why it can't be solved. I understand wiring routes differ but my house is just over 10 years old there are no poles and the quiet line test is that, quiet.

I'm now at the point not feeling what I get is what I pay for and to be honest I probably could downgrade my package to pay only for what is being provided, but is now the point of it - the amount of hassle support have given me i'd rather take my phone, broadband and whatever else to the such likes of Sky, not because its cheaper but the service and support is non-existant with each support advisor basically talking to me as though I don't know how to use a computer.

Is there anything anyone can suggest before i pull the plug, or someone who can look into my line to at least say i'm paying double for something they can offer at a reduced rate. It's been 8 months trying to sort this out and getting no where.

Can you post the connection stats from hub please?

Also a screenshot of the results for your telephone number using http://www.dslchecker.bt.com would be great 🙂
If you want to say thanks for a helpful answer,please click on the Ratings star on the left-hand side If the the reply answers your question then please mark as ’Mark as Accepted Solution’
0 Ratings 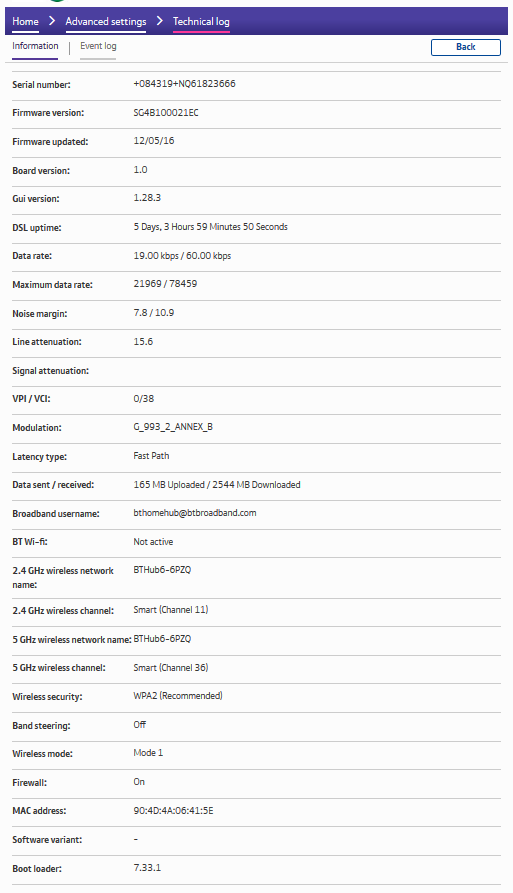 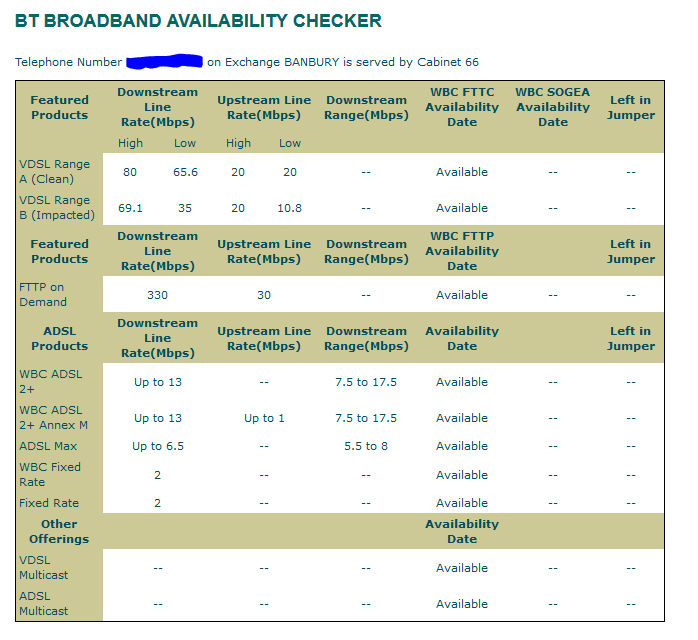 Seems your line is on a 60meg banded profile, likely due to a dropping connection or other instability (in your case a lot of modem reboots)

DLM should relent but it can take months.

As you're below the minimum expected speed for your line, an engineer should be arranged for the engineer to see if there's a fault on the line and hopefully reset DLM for you.

As long as you can prove you've tested from the test socket then there's no chance of a charge being raised. As far as I know there's no charge from BT if there's no fault found.

The only way to get a line reset is via an engineer.

Perhaps you should aks yourself though, do you really need that extra 20meg or so that you'd get over Infinity 1? If not, you may as well save yourself a bit of money 🙂
If you want to say thanks for a helpful answer,please click on the Ratings star on the left-hand side If the the reply answers your question then please mark as ’Mark as Accepted Solution’
0 Ratings

Hi @pauldavies1980 and thanks for posting.

@Webby is correct on this. If you're below the expected speeds then we'll need to get an engineer out to check this for you. I can help with that. Can you please drop me over an email with your details? You'll get the contact the moderators link in my profile.