Just been on the phone to Praneetha, for 50 MINUTES!

"your broadband is within limits - thankyou"

OMG Never in my life have I been witness to such dreadful technical help. Technical help with BT is an untrained phone operator wotking off a check sheet, fact.

Last week, I cancelled BT TV as it was appalling.

I did say I wish to keep the broadband because since I bought my own router to replace the IHUB 5 its been awesome.

An hour later my speed was reduced to 30mb/s even though for the last 12 months I have been getting 60mb/s.

What a joke BT, and now theryre saying that my contract (which was 12 months) is now 18month. So Im tied in until June.

I knew my aerial wasn't good enough so I paid the extra to get a better aerial put up by BT.

The fitters broke my next door neighbours aerial and didnt say anything, I found out when I returned home from work.

Then, ...my TV was getting a very poor signal. BT said there was nothing more they can do and that I was tied to the contract now.

Within 4 weeks (over xmas) I had to put it all back in the box and get Sky.

Needless to say I couldn't wait for January (12 months later) to arrive so I could cancel.
0 Ratings
Highlighted

Oh, so nothing to do with the broadband then.

Does your Homehub replacement give you line stats?

Ive put the original HUB 5 back on to see if it got better again.

I know whats happened when I cancelled the TV they have downgraded my broadband to Infinty 1 speeds. My aqccount still says Infinity 2 so the tech experts wont look past that and make sure im getting the full speed for whatever reason.

Actually the reason is because it isn't on there checklist which they anally go down.

Go to solution
Why has this thread been moved out of the broadband section?

The OP of this thread about the trouble im having with broadband!
0 Ratings
Highlighted

I presume someone got confused  with the subsequent discusion on BT TV ... I've alerted the mods who can sort it out.

Use this speed tester then carry out the further diagnostics and post back a screen shot of all the results including your IP profile for up and down. This test must be done with a wired connection.

This will show your IP profiles which will show which Infinity you are on. The Up IP profile for Infinity 1 is 10 Mbps and Infinity 2 is 20Mbps.

As you have a Homehub 5 can you also post the stats from 1-12 by logging onto the homehub management pages then troubleshooting > helpdesk. http://bthomehub.home/ 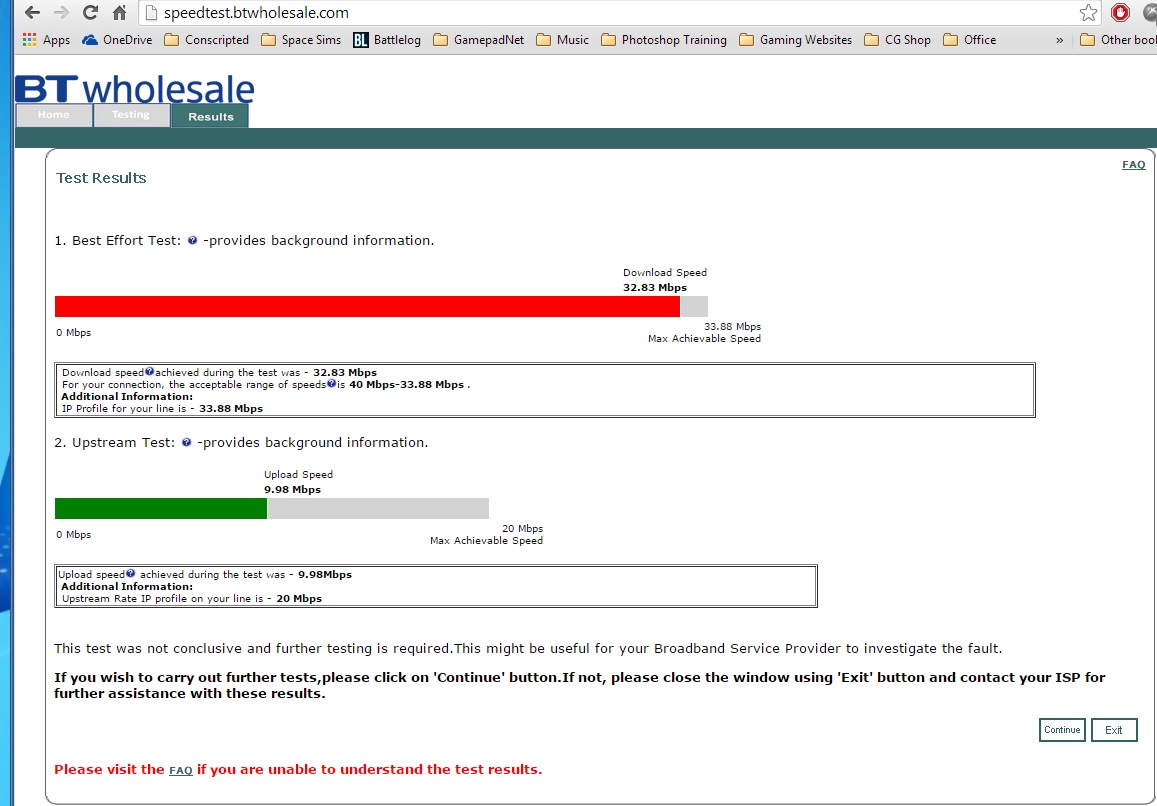