You’ve mentioned that you tired splitting the bands on a previous hub in message 3. Can you try that on your current hub? Can let me know how you get on? You'll get details on how to do that at How do I change the wi-fi channel on my BT Hub?

I have tried splitting the wifi channels and in first ew hours the speeds did seemto improve but then they fall back.

Can I give an example that happened yesterday with the two wifi frequencies together mot separated..

The router is in my study and the worst area, where we need a wifi signal, is in the lounge and they in diaginally opposite corners of the house.

That signal has to travel about 40 feet and through 3 single skin brickwalls and a brick chimney breast which is about 2 feet thick. In that locaction I used to get about 5 mbs and I was ok with that. Recently I have been getting between 0.3 and 1.0. Howver, for a short time yesterday I was getting 40 mbs. Then it went back to about 3 mbs and having checked it just now it is 0.3 mbs.

I live in a detached house on a decent sized corner plot. The nearest house is about 50 feet away and there are no other wifi networks that are available other than the two standard BT ones

I would dearly love an explanation of that..Thanks

I think if it were me I would start with the router connected directly to the master test socket, and do a couple of speed test with a computer hooked up with a ethernet cable. Also I would re-position the router to the centre of the house/property. You mentioned a apple tv, and quickly ruled it out of the equation, saying things weren't right before that. If you are streaming/downloading this will affect your speeds, especially if the device is some distance from your router. Have you tried turning it off and re-running the speed checks. You also mentioned a Sky wifi box. What sort of a device is it, and is it being used when your speeds drop. Again I think if it were me from a trouble shooting point of view, I would turn all devices off, and just do a test on one at a time to see if it can highlight/pinpoint any problems.

Thanks for the suggestions dgw1 and here is what I have been able to do.

I have disconnected my Sky wifi box and my Apple box and that didn't make any difference to my wifi signals. My hub is , and has always been, connected to the master socket and I can't move the hub to a more central location as the hub has ethernet wiring to 3 pc dotted about the house.

Also, as suggested by Devon Dave I have downloaded his suggested Wifi Analyser and the results are bizare to say the least.

So over the last few days, and using the above wifi analyser,  I have been checking the wifi signals at a couple of locations in my home. Now wether I set a specific channel on either the 2.4 ghz or 5 ghz frequencies or set the Hub to Automatic(Smart Hub) the rating, which I am presuming means signal strength/quality changes literraly from minute to minute yet the Smart Hub doesn't change itself to a better channel. I have attached a couple of screenshots from my Androin phone to illustrate this. And these results are from me sat in the room where the hub is.

If anyone has any ideas what is going on I would love to know.

This is really, really cheesing me off. 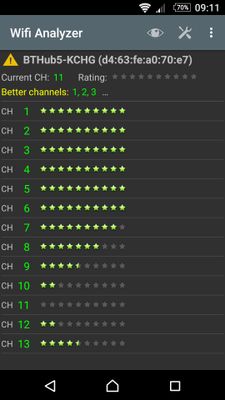 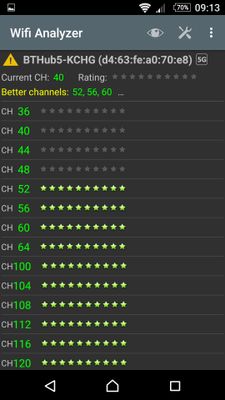 The automatic channel choice is restricted to only three specific channels, and is a waste of time. Manually selecting a channel is the best choice. It looks like channel 2 or 3 is best for you, as channel 1 is used by other home hubs, as one of the three channels.

Thanks for the reply Keith.

If I can go back to my original post on this. I am reasonably it savvy but what I can't get my head round, which maybe I didn't get across in my last post, is this.

If I look at the signal quality and it shows that channel 1 is best I set the hub that. Then 5 mins later it's gone from say 6 stars to 1 and now channel 11 is best and then say channel 6 is the best. In short there is never a channel which stays the best option. And that is in the room where the hub is located.

Or here is another scenario. Are BT sending out really crappy Hub 5's so that people will get so cheesed off with them that they will pay £50 for a new Smart Hub. Conspiracy theories abound.

Channels 1,6 and 11 are the only three channels that smart wirleless chooses from., which is why I suggested manually selecting channel 2 or 3.

The wifi analyser will be detecting other nearby wireless routers as well, which is why the quality keeps changing.

As for the Smart Hub, its no better in that respect, and you do not have the option of manual channel selection.

Good wifi is very dependent on having two or more external aerials, which is why the BT home hubs perform so badly compared to 3rd party wireless routers, as they only have internal aerials which have a lower ERP (Effective Radiated Power). This is the same for the so called smart hub 6 which tries to improve the performance by using multiple internal aerials, and clever diversity software, with varying results depending on where people site the new hub.

The home hubs are designed to blend into a domestic setting, and external aerial were only showing on the original HH1 and 1.5 which had good wireless performance.

Thanks for the reply Keith.

Also if you look at the screenshots in my previous reply you will see that the information is only foy the two channels on my hub. Thatinfo is on the top bar of the screenshot 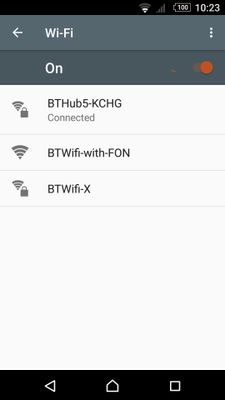