We have been ahving some work down on our house and the electric has been on/off numerous times over the past few weeks. This has lead to a drop in my sync and visible speeds. Everything is finished in the house now so I am hoping that it will rise again. I have read that it should be automatic?

Apart from this my line is stable and I hav'nt had any issues.

It will be almost automatic.  DLM will raise your cabinet->modem sync speed automatically.  Your IP profile may or may not change automatically; while hoping for an increase disconnect/reconnect your HomeHub each morning to force a profile update.  Do NOT touch the modem.  Best way to disconnect/reconnect the router is via the web interface at http://192.168.1.254/ ~ or you can power cycle or use the reset button.

Ok thanks for the info. Do you know of any software that I can monitor my connection with? I purchased an unlocked modem and whilst the power was off one of the days I swapped out my ECI for the Huawei (as my cab is Huawei).

My initial concern is that clearly the modem has all the relevant info/stats and I cannot seem reach that from windows without forcing an IP and wirig to LAN2 on the Huawei. Is there a way around this?

Thanks for your diary.

Just ordered my Bt Infinity  and I must say after reading some of the posts I am holding my breath.

So to read read positive thoughts gives one faith.

I have always had good service from BT over many years.

Looking forward to my upgrade and hope for an improvement on my present speed of 9.7 on standard broadband

There are a couple of bits of monitoring software around.  The one I use comes from BaldEagle and Ronski on Thinkbroadband and Kitz forums.

I use my own more interactive graphing that uses the stats collected by that program.

It is still rather ideosyncratic for my own use: I'm gradually making it a little more sensible for other users.

I forget where the other monitoring code is: maybe someone else will post it here.

I mainly use the first one because I found it first, I'm used to it and have lots of data saved in its format.

My memory is that the other one is strong on realtime stats and not so strong on longer term monitoring,

My line already appears to re re-syncing and altering up/down speeds, all be it by small amounts but still. Here are some stats and graphs taken using the link you suggested.

First Set After All Unplugging/Work In House Is Finished: 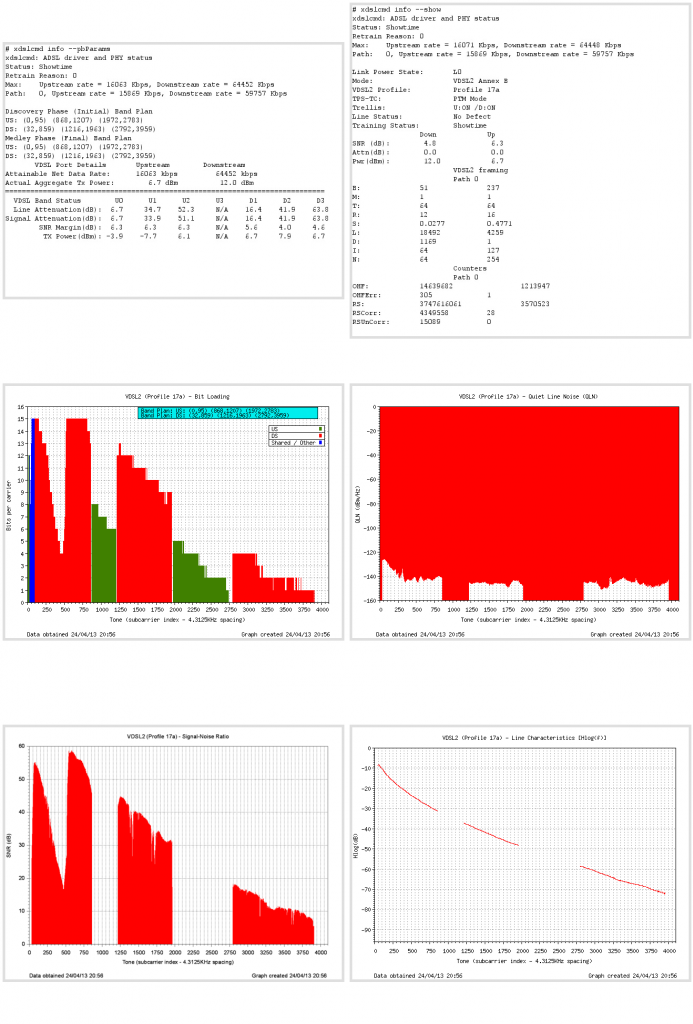 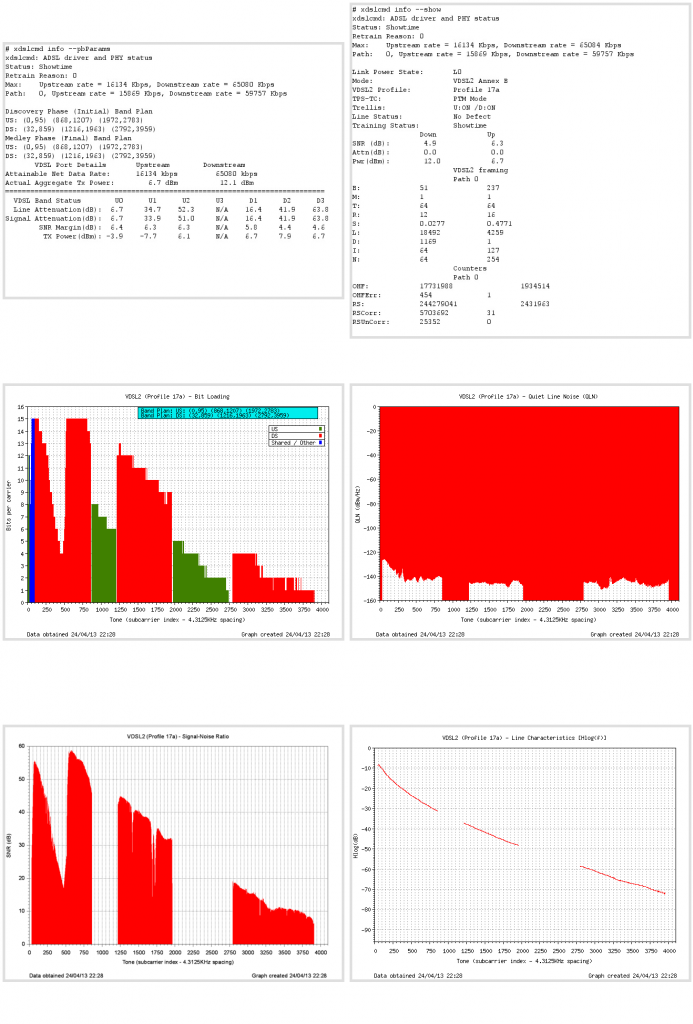 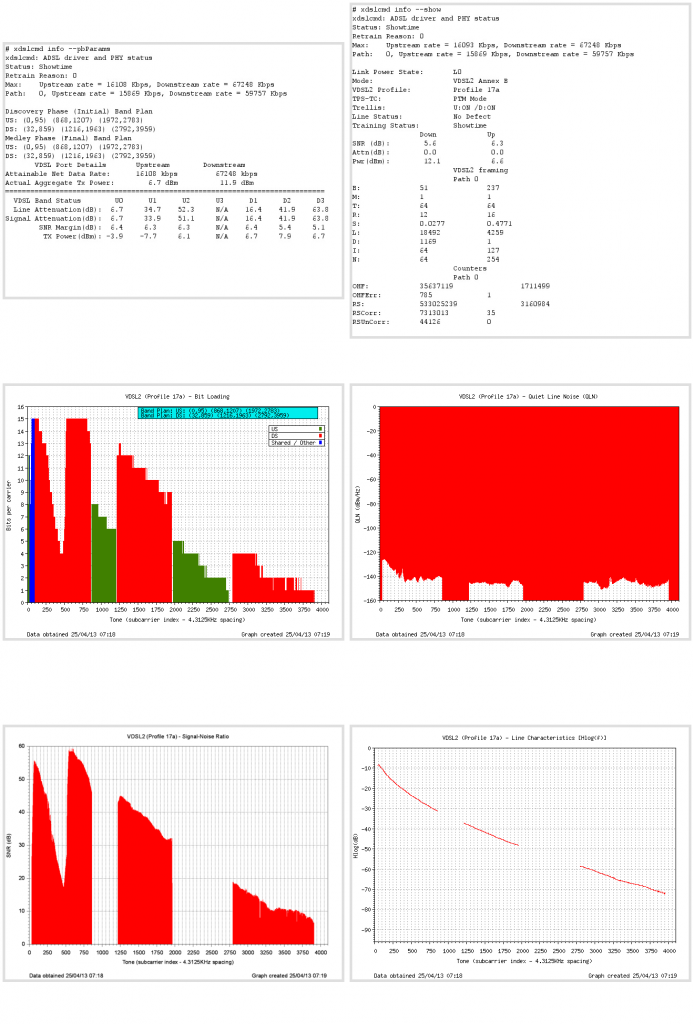 There was no change during the day today.

When I first had Infinity my line certainly to me appeared stable, gaming was fine, no spikes or disconnescts and a I was getting the following; A few days later I was getting; Then we started to have work done on the house and it with the on/off's it dropped to; Interestingly during the frequent on/off period whenever I would turn the modem back on I was down at around 50/14. During this period I purchased an unlocked Huawei Modem as I was given an ECI Modem by the Engineer. My cabinet is a Huawei. I plugged in this new modem and the line jumped to this;

Coincidence? Could be, or maybe the talk of correct modem for correct cabinet has some truth to it? The Modem did have the latest firmware/hardware blob which on longer lines does have an effect. Using trusty google maps I estimated my line to be around 500-600m as it runs with the road(ish).

So we will see how things go. Maybe my initial speed was never realistic, but we wil never know as the work started in the house well be fore the standard training period was over. We will wait and see what happens. As it stands of this post i am at; Don't get me wrong, this is in no way a complaint or moan, I just want to keep my diary upto date. All i need to do now is learn a little more how to interprit the graphs and stats. The basics im fine with but there is some detailed info in there I am sure 🙂

Does anyone have a source for explanations on how to interprit the graphs and stats?

For interpretation, look at the threads on Thinkbroadband and Kitz.  There are people there with much more knowledge than I have. e.g.

You will see two figures each for up/down speed.  (top left listing)

1 - Max is what the modem thinks is the maximum you could get away with.  That will change more or less continuously by a small amount as you get small differences in line noise etc.

2 - Path is what the modem is actually synced at; the cabinet to modem speed.  That won't change all that often; only when the modem needs to resync for some reason.  That will typically only happen after a things get so bad the current speed can't sensibly be maintained, or when DLM is sastisfied that things have been consistently good enough to allow better speeds.  The downturn could happen at any time, the upturn typically only happens in the middle of the night.

Looking at yours, the Path speed has indeed not changed.

The other fairly easy to read detail is the 😧 columns (top right listing) which shows the level of interleaving.  😧 1 is fastpath. You have 😧 1169 which is quite a bit of interleaving.  It will cause about 8ms extra in your ping/latency.  (My interleaving is slightly worse at 1207).

The 'static' graphs you show give how much data is being packed into different frequencies.  You need more expertise then I have to interpret them properly.  Some of the gaps are because of the way things are meant to work, and some may show problems.

If you have started collecting the statistics fairly continuously with the logging part of that package, then the long term graphs of just a few parameters (especially the 'easy' ones I mentioned above) will help you monitor the health of your line.

Run graphpd.exe to get those graphs (or my http://www.programbits.co.uk/modemGraph/plotstats.html if you are feeling brave)

You seem to be using an old batch file script version for the harvesting/graphing.

The much quicker & robust .exe program versions are available here:-

Via a GUI, the whole thing can now be automated to harvest 'snapshot' stats & graph them on a user defined schedule along with 24/7 ongoing stats. 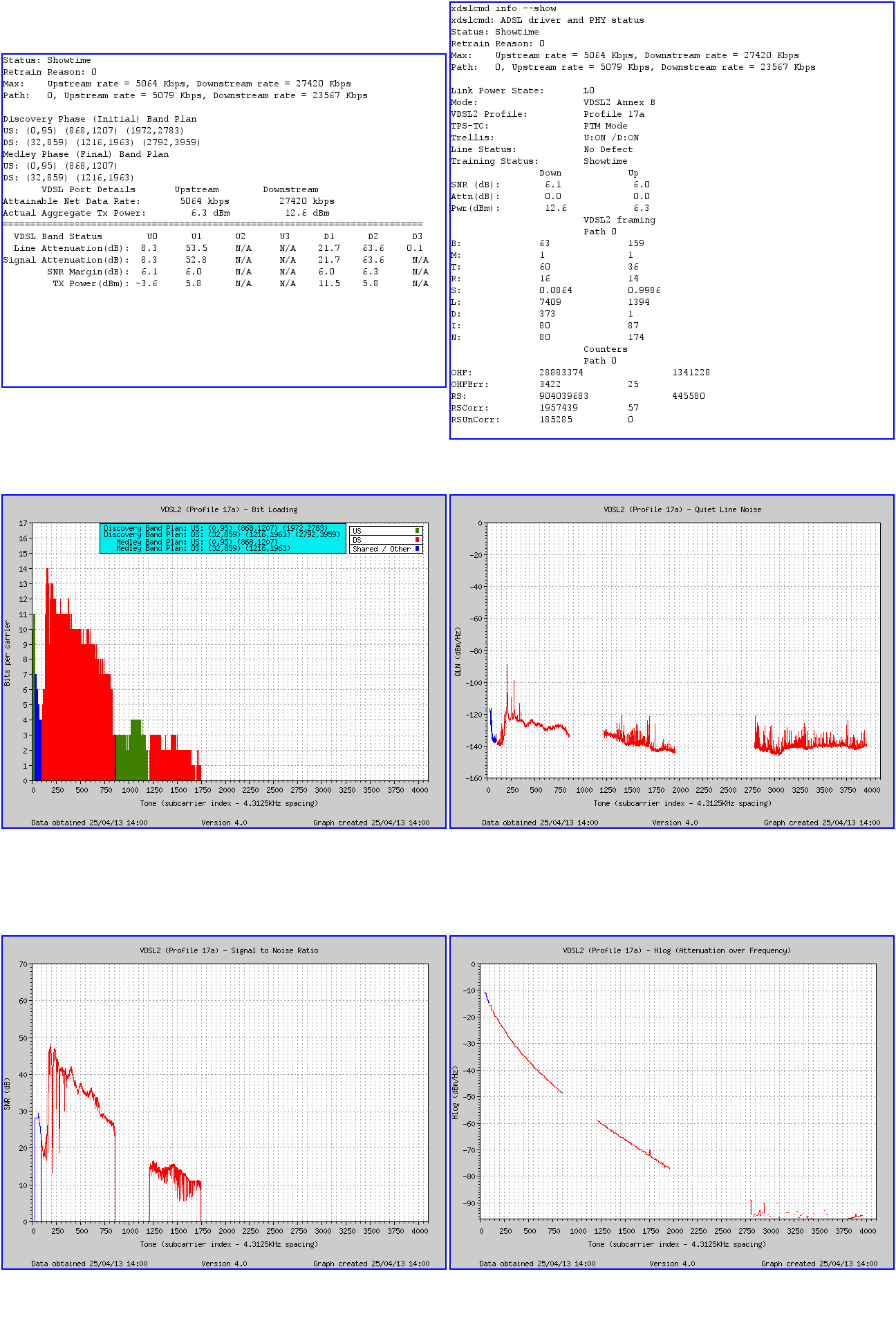 QLN & Hlog graphs only ever update whenever the connection syncs, whereas SNR & Bitloading graphs change dynamically with time (using the original unlocked BLOB).

I did use the new BLOB for a while, but I have recently reverted to the original BLOB so that I can compare my connection's performance now with what it was like a few months ago.

I seem to have taken a crosstalk hit since 27th December:-

My sync speed has reduced from almost 30Mb in December to 26 Mb in January & again to not much more than 23Mb in April.

We can see the 'noisier' times for your connection in the SNR graphs & SNRM levels.

Left alone for a while, the high Interleaving depth may reduce.

If it does, you are likely to see SOME speed increase.

You seem to be using an old batch file script version for the harvesting/graphing.

Apolgies, I must have posted the wrong pointer to Bald_Eagle's programs.

Anyway, you are now getting his top level advice

Thank you for your detailed reply and direction to the updated program. I am continuing to monitor and slowly learnig to interpret them. Some very in depth stuff from my reading so far (makes it interesting).

May I ask do you think that that using the newest hardware blob which lacks the dynamic bitswapping could have an adverse effect on the lines recovery? I am guessing that the latest blob must push the modem to connect at a higher rate somehow, an therfore potentially cause more harm than good in specific circumstances. I would appreciate your response on this in as simpler terms as possible to aid in my understanding.

Here is a set from this morning, interleaving remaining the same currently; 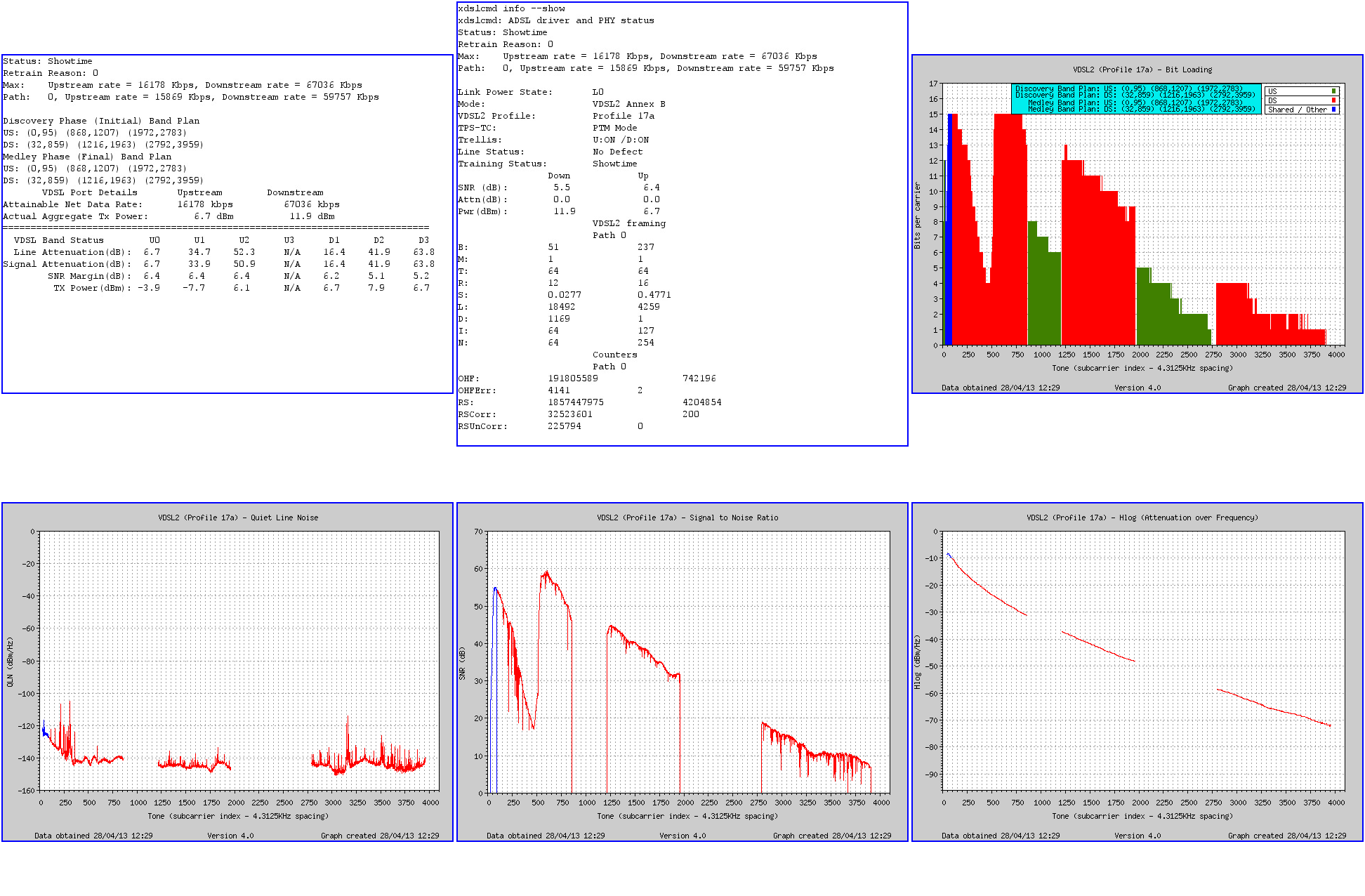