I know us Linux users are often left out in the cold but come on BT, Silverlight! WTF 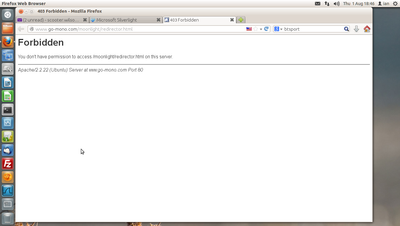 Maybe if BT had told me that using my Linux laptop I couldnt access BT Sport (they told me free and available to ALL broadband customers), I would not have locked down another 24 month contract seeing as it was a strong selling point to stop me leaving. Hmmm... misselling? No apps for Samsung, Xbox, PS....? All seems a little poorly planned.

With only 18 TV Channels and 13 Radio Channels I was looking forward to BTSport, alas, not to be

Imagine being told you can have a car but it's got to be a Ford !!

You can have BTSport free but you have to buy a Microsoft PC.

Maybe I could try Sky ...mmmmmm.

The guy I spoke to on the help desk first suggested I should complain to Microsoft, then suggested I go to a local PC specialist who will be happy to install Silverlight for me.

Microsoft have declared many times that they will not allow Silverlight on Linux OS. I spoke to a few software engineers today at work (UNIX and Linux) who stated categorically that Silverlight will not go on to Linux. Next best bet is a programme called "Moonlight" which has stopped updating, and is out of date for BT Sport.

I even used a version of WINE with Silverlight on, but this was out of date for BT (would play Netflix however, so that is progress!)

Unfortunately, it does seem that I need to find a way of connecting my phone or PC to the TV to view on the big screen, as despite having a Wii, Xbox 360 and Samsung Smart TV and Blu-Ray, nothing can access the mental DRM placed on BT Sport.

Ah !  That explains why I got the " you are not allowed" access prompt when I clicked on the Download link,  thanks AEW17

I'm referring to the "Moonlight" portal I was directed to.

I've read in the past on here that the new(er) Vision boxes ( I have an old silver one ) run on Unix/Linux so is it me just being a silly old geezer but why can't a desktop Linux PC run BTSport ???

Netflix rejected Silverlight a few months back reverting to HTML 5 instead.  Silverlight is the Sinclair C5 of browser plugins.  No self-respecting website uses it for anything, ever and for me it's a bizarre choice