I have decided to present my issue here as I have been struggling since the end of March with my VDSL connection and after 4 engineer visits the problem still persists.

I am aware of the site:

speedtest.btwholesale.com/ which when used will report the same speed through which I connect at any given test attempt. 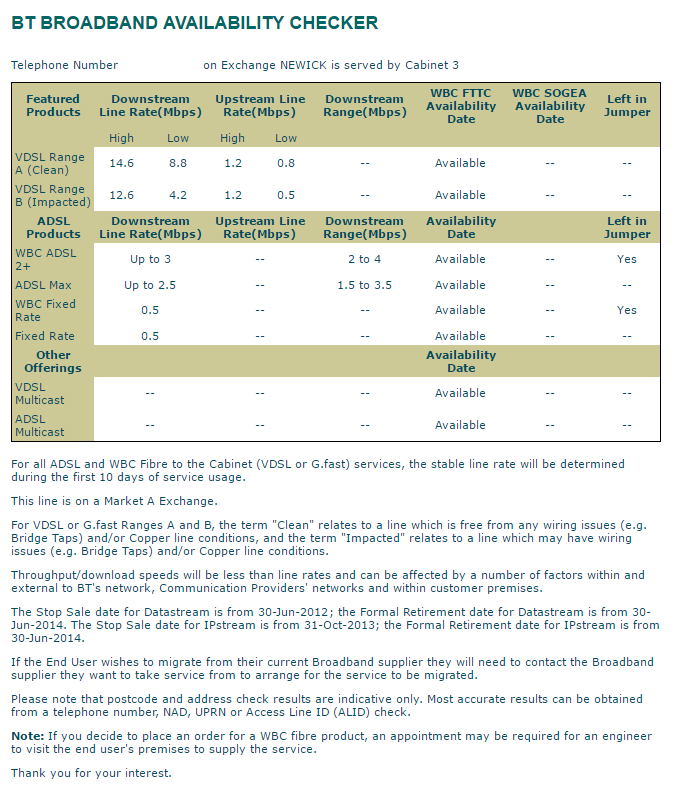 I have now had the fault reopened and an engineer visit is scheduled for June 23rd.

Another strange thing is that the agent in the call centre this morning did not ask any questions (other than security) about the fault, nor did any line tests. He just said "I have been told to get an engineer out to you" with no explaination of the problem required from myself which is good.

What I find hard to understand is that when engineers have visted in the past they have never been given the history of the faults and being in a rural location, there is not much hisotry of issues from other locations in the area either. So they are going in pretty much blind.

So I went online to check the faults as I had not had the usual confirmation text of an engineer visit being setup to find that the fault has now been marked as completed!

I am very angry, why can people not do what they claim they will do.

I had a call back today after my complaint and an Engineer has been scheduled to come out tomorrow 18/06.

I suspect that we have a HR issue somewhere between the cabinet and I.

Oh and the line quality is really bad now. So many errors and the max speed struggles to reach 1mb/s
0 Ratings

Now waiting on a engineer visit. I have seen on the faults site that the fault is with an engineer today 18/06. When I used the text chat service on the website last night it was confirmed that an appointment was in place.

TDLR: I am very confused. I have been told and can see that there is an appointment on the website.But I have not recieved a text confirming it.. I wait.

okay so a pre arranged call back after the engineer visit...

..well the engineer did not turn up!

So this was a 'level 2' agent working the broadband department. They apologised for the engineer failing to turn up then listened again to the problem and the comments that were left when the previous engineer visited. She seemed to spend a lot of time updating information on 'my case'.

I was transferred to the phone line team. I had to explain the problem again. Confirming that I have tried all the steps that are on their checklist. I was then put on hold whilst the phone line agent spoke to the broadband team

I have heard that we can claim back £10 for each missed Openreach appointment. As I have now had 3 no shows in June, anyone know how I can get this compensation?
0 Ratings

I did receive a call back from BT after to line cut out and I was passed across to another technical desk.

At first they wanted to send another Home Hub, put I declined this offer as I now have 2 HH4 and 2HH5 as well as my TD-9980.

So this time a broadband engineer will be sent. I also thought it best that this was not arranged for the next working day as these always seem to fail. Maybe there is a communication issue here?

So I wait until Thursday, maybe the engineer will show up. Maybe this painful experience will finally be over. We will see.
0 Ratings

So they booked an incorrect appointment at a time that I was not at the property. telling me when I contact them that it cannot be changed.

This has now gone on for 3 months with v poor dsl service and impossible to use phone line.

Hi @seancswash I have to agree that booking the wrong appointment is not acceptable and I'm sorry that happened.

We will be happy to help you with this if you send us your details. You can contact us by clicking on my user name and selecting contact the mods.