ive logged this with BT on numerous occasions with the engineers not finding any faults, however it still persists.  We have obvious crackling and hissing issues on our line(all the time) with people calling have to ask us to speak up and indeed when I phone my wife she is quiet over the crackling and hissing.  When dialing out more times than not we get crossed lines.

We have on numerous occasions gone through using the master socket only with an standard analogue phone(hanging out of the loft where BT terminated our master socket) with the same net result.  BT seem to not want to spent the time looking at the issue, normally get the engineer turn up go through some things, look at his watch and disapear.  Im paying for a substandard service which is not being fixed.

To be clear with have no filters on the line, the adsl plugs directly into a filter socket on the master socket.(Dual port, one for phone, other for the ADSL).

Just to check, I assume that you have tried in the test socket of your master socket? 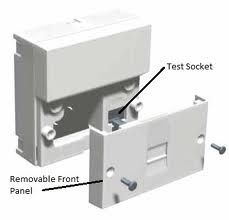 This just proves (if the fault is still present) that there is not an issue with your own wiring or equipment.

thanks for the reply.

Yes, should have made it clear that with the phone hanging out of the loft, it is plugged directly into the test socket with the NTE plate off the front.

I had the same problem and posted on a different thread about 6 weeks ago..

For 3-4 weeks in February I had crackling and hissing noises that made the land line phone iimpossible to hear.

I reported the fault and was told that the line was "clear" up to the main socket and that if an engineer was called out I would be billed!.

The test of taking the master socket off and plugging in was done but had no effect..

HEY PRESTO!  for the last 3 weeks the line has been clear as bell and seems to have repaired itself or the fault has been found..

My advice to anyone is just keep plugging away...write to BBC Watchdog or the media, as I have no confidence in BT customer service people and will be leaving at the earliest opportunity...August 31....in my case ,when the BB is up and will be taking line rental with it..

Ok have an open fault ticket with bt(VOL012-***********), engineer came out for our crackly/noisy line, wife just phoned me from the house phone, sounding just as rubbish comfirming BT had visited and no fault found, nothing else he can do. WHAT PLANET!!! he heard the noise on the line but his little device says "no" and off he scurrys after stating nothing more can be done unless we log a broadband fault!!! For the love of God I just give up.

Mods, I clearly have a fault, its not being fixed, what more can I do?

thanks for the advice, I did, but BT just re closed it with no comments a few days later with no option to reopen. This really is poor.Ive just come off the phone and its awful. How do I escalate this?

I am sorry to see you are having problems

I suggest you contact the forum mods they should be able to get this problem sorted for you this is a link to them http://bt.custhelp.com/app/contact_email/c/4951