Very slow speeds, new router worked for a week but no longer

I am signed up to Unlimited Broadband with BT Infinity 2 (up to 76Mb D/L speeds). I enjoyed speeds of around 60 for about a year and a half but for about the last 2-3 months I noticed that I was only getting speeds of ~9Mbps. I contacted BT support who were terrible and were trying to help me boost wireless speeds although I told them a number of times that it was a wired connection that I was complaining about. Eventually, they arranged for a BT engineer to be sent out.

The BT engineer came and told me that it was a faulty router and that I would need to contact BT and get them to send me a new one and it should be free of charge as it was due to a fault in BTs equipment. I contacted BT support who outright refused to send me a new router and told me that I would have to re-contract to receive a new hub. I eventually reluctantly did this just to fix the problem as I was getting nowhere. I was sent a hub 6 to replace the 5 that I was using but I was not sent new cables (thanks BT). I plugged in the new hub using the cables that I already had and once again enjoyed speeds of around 60Mbps for about a week. However, I am now once again getting speeds ~9Mbps.

I have changed the ethernet cable from router to PC to another cat6 cable but this hasn't worked. I'm unable to change the ADSL cable from the little box to my hub however as I do not have a spare one and I feel that I have spent enough money on new cables already.

Any help would be appreciated as I feel that I am getting none from BT support!

I'm sorry you're having problems with the connection speed. I'm sure we'll be able to help. Is the connection slow at all times or only certain times of the day?  Can you please run the speed test including the further diagnostics when the connection is slow and post the results?

Thank you for your reply,

Please find below the speed test and further diagnostics 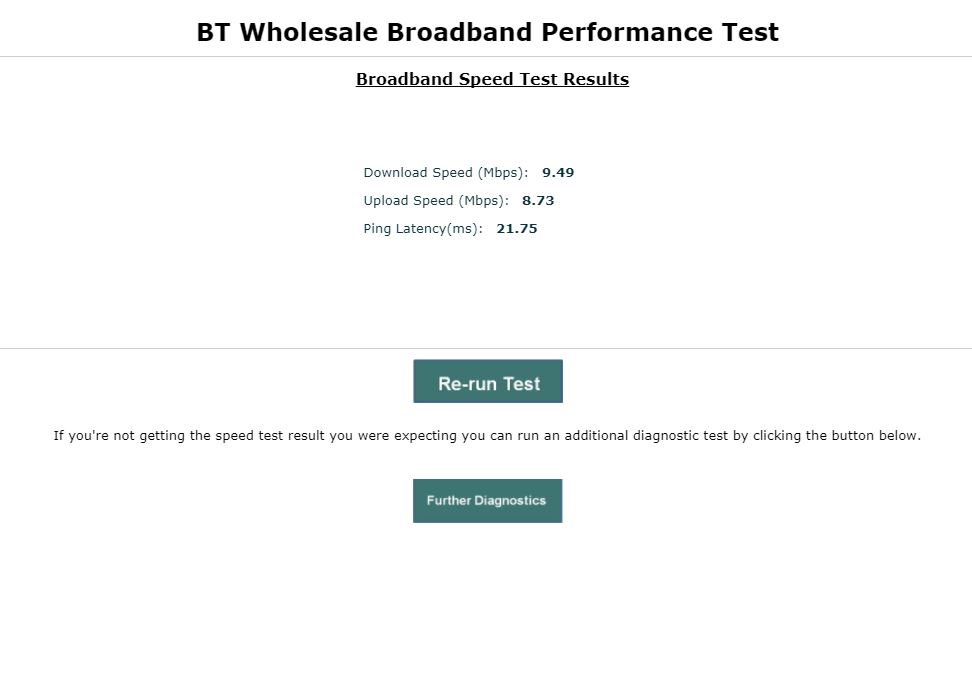 Thanks for running the test @owenmc92. I'm assuming that was over ethernet connection?

Can you please drop me over an email with your details and I'll take a look at this for you. You'll get the contact the moderators link in my profile.

Yes, that was over an ethernet connection using a new cat6 cable just plugged in today. I've tried 3 cables all with the same results

I've sent those across to you.

I gave your mobile number a quick call, I'm sorry that I didn't get speaking to you today. BT Wholesale have checked the network side of things and haven't been able to identify an issue on the network.

How have things been with your connection over the last few days? If you are still experiencing issues, please get back to me.