I've had this problem for a few frustrating days now, so Im hoping an expoert can help.

I have a wired device (an Arduino + ethernet shield) running a simple weather webserver app plugged into my network and have port forwarding set up so it can be seen from the outside world. For a couple of days all was well but I unplugged it from the network and now (after reconnecting ) it isnt picked up on the device list of the Home Hub so the port forwarding isnt working.

I can ping it internally and typing its local IP address in a broweser it's working fine. Sometimes it briefly appeared in the device list but greyed out, as 'not connected'.

I've tred loads of restarts, setting its IP address as static (when it briefly appeared) but to no avail. This morning I did a factory reset - got most of my wifi and wired devices back on... but no Arduino and the symtoms remain - locally its working fine.

It's suggested by an IT friend that I buy a 'proper' (paid-for) hub but I thought the BT gear was meant to be be pretty good?

Any ideas anyone please? Its driving me mad and swallowing up loads of time trying to get it working again.....

Welcome to this forum.

You should find that the guide on this page some help.

Static IP addresses need to be outside of the DHCP range.

The device list on the home hub is not that reliable, so do not worry if a device does not show up.

I tried the static address but it didnt make any difference - of course now its dissapeared again from the device list I cant change anything on it. The factory reset I did this morning did result in a BT firmware update message to be displayed, but didnt fix the problem

Weird thing is that the port forwarding worked fine for a couple of days so Im guessing the CG-NAT issue isnt the problem ? Im pretty sure (I hope!) Im not sharing my IP address.

I've re-setup the port forwarding, using the devices IP address (192.168.1.103) as the device doesnt appear and so cant be selected, but its still invisble from the outside when I use my public IP address, but fine if I access it from inside. It seems to be that when the device appears in the home network map its accessible from outside, but when it dissapears from the hub list its also invisible from outside.

Than I'll keep trying factory resets and maybe try disconnecting everything else.

If all else fails would a different hub work on a BT line or is that just asking for trouble?

Try using these settings on the device.

Do not use the device name, and make sure none of your device or application names have spaces in them, as that upsets the home hub, and the error is not reported.

Which version of the BT home hub do you have?

They all support port forwarding, provided certain rules are followed.

Many thanks for the advice,

Ive changed the settings of the device to that suggested, deleted the old port forwarding service and added a new one using the IP address, but it still refuses to appear.

With the new IP address I can ping it locally and also get access to it internally but its not available externally or visible on the Home Network map...

Im not sure where I can find the model of the hub - but attached is a shot of the firmaware version. 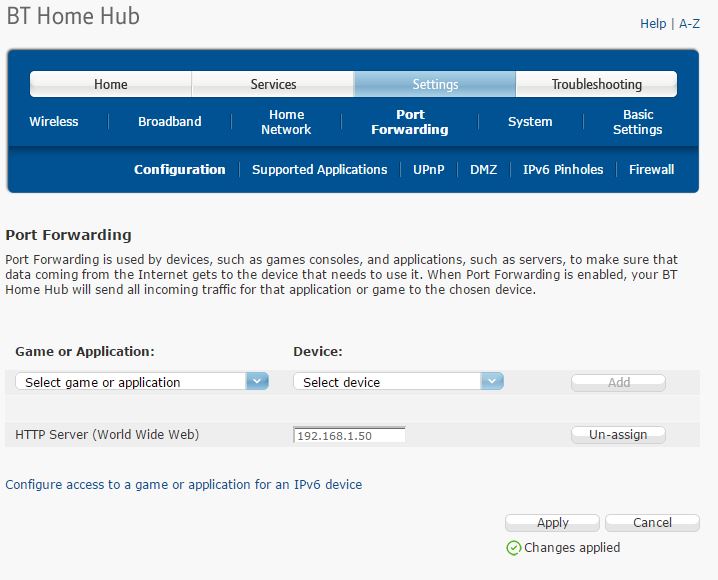 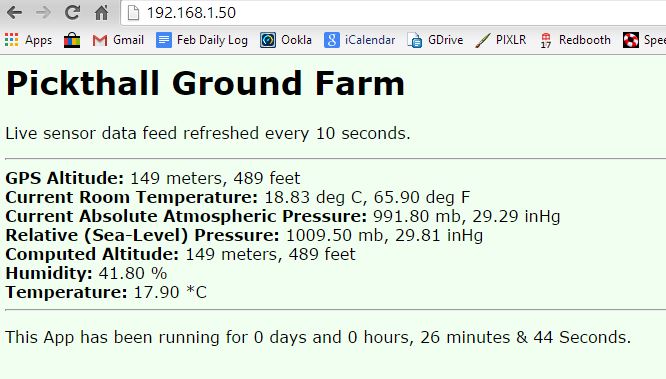 OK it appears to be working now. Strangely I've added a few lines of code to my app to send OUT a ping and as soon as it did that it appeared on the network map and was then available from outside using the hubs IP address....

but if that what it takes to get it working again I'm happy.

Thanks for helping out, I like to understand more about this so I can deal with it but it's beyond my understanding!

Thanks again Keith, I'll post any findings if they arise so it may be of help to others in the future.

I think that may be a home hub 2 type A, but it should be written on it somewhere.

Mapping the application to the IP address as I have suggested, will produce the most consistant performance.

For some reason, the home hub versions A, do not give reiiable results with IP addresses within the DHCP range. They are also very fussy about device names as well, and attempts to map to the device name, works for a while, and then fails. This has been reported before.

At least you have it working now