Could well just be the game but i cant even remember the last time i played a match without lag.

I try most days not really there's no point. 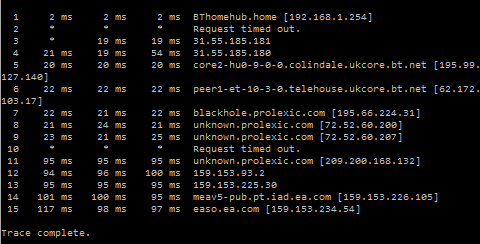 Still no good cant play any p2p games my gameplay is not in sync with the other players.

If BT inifinity's going to be like this for ever i dont need it.

Are you using a wireless connection to the Xbox?

If you are, then that will introduce a delay.

A wired Ethernet connection to the home hub should be fine, provided there are no other users using your broadband connection.

Hi no its wired having been searching a fix for months there is nothing i have not tried.

Port Forwarding,DMZ,Wired,wireless the speeds are great but something is seriously wrong somewhere have bought new Routers,Ethernet wires makes no difference. I dont even use the broadband much.

Judging by the round trip time to the address 159.153.234.54 that you included in the earlier trace route, this server looks to be in the US. Is that correct / expected? Are there no UK / European based servers?

If the servers are US based I'd expect there to always be lag.

Yeah but i'm kept being told that the game should be a direct match up with my opponent.

I can play friends a few miles away but after that every match lags.

What do you mean "I can play friends a few miles away but after that every match lags." ?

1. If you play an opponent that lives near you, the game plays OK?

2. If you play an opponent that lives in the UK but not near you, the game lags?

3. If you play an opponent that lives outside the UK, the game lags?

I don't see how two opponents that have different round trip times to the server can have similar game experience. Unless the game server has some smarts and somehow measures the delay to each client such that it penalises traffic to the closest client by an amount that would then equalise the delay.

There's a discussion of a mechanism called Lag compensation that talks about gaming software using this type of approach, but I've no idea whether the game servers you use have this type of feature.

I don't think this will help you fix whatever issue you have, but it is intriguing.

Yeah if i play a opponent near me its ok. The rest of the UK and outside of the UK lags.

Alot of the time im saying its like the other person is playing a different game, Mine feels very slow/delayed players being dragged around.

Have even quit games because the lag was to much and getting messages back saying what lag.

If this didnt happen myself i would have never believed it as it just doesnt make sense.

Do you have a Windows PC with a browser that has Java enabled? If so, the next time you're seeing an issue with a game you could try and run a test to http://www.pingtest.net/.

The test to this site is a little different to the BT Wholesale speedtest. The BT speedtest is more about measuring upload/download speed. The test on pingtest.net uses a "ping pong" mechanism with small packets (<100 bytes) to measure packet loss, latency and jitter (variation in latency).

From the link in my previous post "The client and server communicate with each other by sending small data packets at a high frequency (usually 20 to 30 packets per second)" so the small ping-pong packets in this test would be more like those used in gaming.