After spending an hour on the phone going round in circles I thought I would try here, any help would be greatly appreciated.

My Mother has BT Broadband option 1 so has a 10 GB limit, which is enough for all she does.

She got BT vision installed around the 20th Feb - with the TV Unlimited option.

She then started using NowTV around the 26th of March.

Her Broadband usage has suddenly increased

You have also used 0.12 GB of YouView but because you have a BT Vision subscription pack this isn't counted against your broadband usage allowance.

The first time she got an email warning her she was above her usage I didnt worry as I seen the following link which stated there was a problem with the usage monitor and excess usage would not be charged:

She recently got an email stating they will be charging her an extra £35 for exceding her usage in April, and I imagine there will be another £35 for Mays usage.

She watches a lof of movies on it, especially NowTV but yet it states she has only used 0.12 GB of YouView!!!!

Looks a lot like YouView usage is being incorrectly counted and being charged for.

Any advice would be appreciated,

Geoff. I am on unlimited so have not been following closely but i understand that the usage monitor does count YouView (and presumably sends the warning messages etc) BUT when the bills are produced YouView is excluded and you are not actually charged. To reassure yourself in the short term i recommend you check your bill to see what is actually being charged on that.
0 Ratings

Is the Youview content only for iPlayer, 4OD, 5demand etc.

Where as I dont think NowTV would be included in this?

OP - NowTV is subject to data use on any Youview subscription unfortunately, it is not made clear enough by BT in my opinion, also any Milkshake programmes appear to be subject to the same criteria. Therefore if you've gone over your 10GB limit due to any NowTV usage or Milkshake use then it's chargeable.

BBC Iplayer, 4od, 5demand are unlimited use with your Youview package.

I think BT should come out and make this crystal clear to all Youview customers.

There's no need to worry about your BT Broadband usage allowance. With BT Vision Player Unlimited, all BT Vision and YouView On Demand and catch-up TV is exempt from your usage.

(the bold all is how it displayed on the website)

Also it was clearly stated on this forum in November.

If you have to YouView through BT then no need to worry about your BT Broadband usage allowance - all BT Vision and YouView On Demand and Catch Up TV is exempt from your usage.

And most reasonable people will assume Youview on demand (supposedly exempt as mentioned on the BT website) to include anything like NowTV and Milkshake. Which ARE both subject to data usage.

I have Youview through BT and I can assure you, from experience,  any usage of NowTV and Milkshake will count against your data usage and if you go over your limit you'll be charged.

And most reasonable people will assume Youview on demand (supposedly exempt as mentioned on the BT website) to include anything like NowTV and Milkshake. Which ARE both subject to data usage.

I have Youview through BT and I can assure you, from experience,  any usage of NowTV and Milkshake will count against your data usage and if you go over your limit you'll be charged.

So take a look at

and both Now Tv and Milkshake are clearly shown as Youview on demand.

As well as Freeview and Catch-up TV, YouView gives you access to great on demand content including BBC iPlayer. Best of all, you no longer need to huddle over your laptop! You can enjoy watching your favourite shows on your TV.

As well as the standard players which come on your YouView box, you'll get access to BT Vision with thousands of hours of on demand content including Films, TV, Kids, Music and more. In fact, BT Vision has the largest video on demand library on YouView. 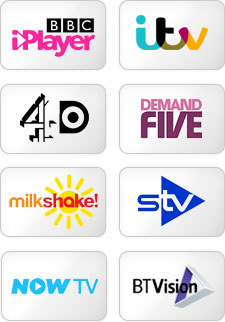 Thanks for the replies.


I have not got a proper bill yet, but under usage I have the following charge added under broadband, so looks like I will be charged for it: