"our house has been empty since Friday night. I have returned - in the last hour - to find a ten-fold increase in my broadband speed."

With comparison back to my "layers" post, this tells us

- That there isn't much of a physical problem going on right now, not for the last few hours.

- That the sync speed is high (and, by the stats, has been high for 40 hours. It isn't as high as it could get, but is still pretty good. So, a small amount of linger after-effect, but not a lot

- That the "IP Profile" has recovered to a decent level too - implying no problem for a while.

With all of those conclusions, I'd have to say that having no-one physically in your house is a fairly significant factor in improving broadband.

The sync speed you are at isn't as high as it could be (3.3Mbps vs 5.5Mbps). Normally, a lowered sync speed would go hand-in-hand with a raised noise margin - but here the new noise margin is only 8.7dB. That is raised slightly, but not as much as I'd have reaqlly expected.

Conclusion: There is also something else having an effect, that can happen even if the house is unoccupied.

"What has changed? What has caused the line speed to increase?"

It hasn't actually increased - your line's sync speed has been seen to be higher. Go back and look at all your ADSL statistics reports, and you'll see that at least 10 of them have gone faster than this.

You are experiencing faster speedtest speeds simply because the lingering after-effects have gone too.

Why? Something has been more stable, and probably because no-one has been living there.

It suggests that something you do *every day* is affecting your line.

"Btw, I have to say in passing that 3.28mbs is an unprecedented burst of speed. I mean really - that's phenomenal. It's bridge of the Enterprise, interstellar overdrive type of stuff. I would be absolutely amazed if that can be sustained."

Your line will sustain higher. You've sent us plenty of ADSL statistics where the line is synchronised at 5.5Mbps.

What you need now is NOT one-off speeds of this. You need to turn it into something sustained. A time when you're modem stays connected on the same sync for over 6 months.

"Let's play with the idea that the cable is damaged beneath the laminate flooring. Would this also cause a breakdown in my telephone connection? And if not, why?"

Unfortunately, you haven't described the setup of your phone line at all, despite being asked.

No-one can give you any specific answers without this.

"Secondly, if the cable beneath the flooring is worn, how is the line speed now at this present moment faster than it's ever been before? I think I can understand how a faulty cable can cause slow speeds - but I can't quite grasp how the speed can then suddenly become faster than ever before."

The line is NOT actually synchronised faster at the moment. Some of the statistics have had it more than 50% faster than this.

However, you are experiencing faster speeds at the moment because all the lingering after-effects have disappeared, for now.

"If we think of an electrical current supplying power to a bedside light, an intermittent fault in the light's wiring would result in the light being on sometimes, and off at others - depending on what external movement prevents (or ensures) the relevant wires are in the correct place. However, no matter how the wires were positioned they would not make the light suddenly get brighter."

Have you seen what happens to a light when the switch ends up arcing? If all you have seen before is a light "off" or "on", its behaviour when arcing, of getting dimmer and brighter, on and off, is rather inexplicable. And if the electricity supply has a brown-out, that too looks strangely dim, and perhaps intermittent.

What would be your view of the world if that lightbulb had been suffering power "brown-out" for the last 10 years? You'd think "dim" was normal, wouldn't you? When the power company fixed the power supply, you wouldn't believe how the lightbulb could suddenly get so bright and consistent.

In effect, your view (so far) of your broadband connection has been of it permanently in a "brown-out" state. When, suddenly, it all works fine - you think it magical.

Broadband is a different beast from plain old electricity. The kind of frequencies used to pass data over the copper wire are actually radio frequencies - and are affected very differently from the plain on/off of a lightswitch.

"And yet with my internet connection this is what seems to have happened. My speed - being over 3.0mbs - is inconceivably and unfathomably fast all of a sudden."

Then the 5 Mbps you ought to get will be even more inconceivable.

That last night we were without the internet for a good couple of hours - between approximately half nine and...well, I don't know because I gave up waiting for it to re-established. But it was as though the Hub could not connect to the internet. I haven't experienced such a total i.e. complete break in internet connection like that before. Normally the speed just dips to about half a meg - but this was zilch, zero, nada, bupkiss.

However the interesting thing is that if you look at my stats they do not register this break in connection and are still showing that there's been a connection for the past two days. So I don't know what that means? Does that point the finger more firmly in one direction or the other? I can barely tell any more.

The fact the line stayed in sync means that the fault wasn't likely to be a physical one with your line.

It sounds more like a problem with  the hub being able to communicate with BT's network in a different way, so perhaps there was actually a different fault, within BT's network, that caused this.

When I look at the BT "service status" page, I can see that on Sunday, there was a fault that affected many dialling code areas in "the North of England", which was fixed at 17:35.

I don't think it points the finger at your line at all.

And it seems there was some planned maintenance at 11PM in 01423, lasting 90 minutes.

certainly strange that you are back home and problems have started again.  until you conenct to the test socket and eliminate all internal wiring finding the problem is extremely difficult.  you could get another engineer but if he finds the problem is internal then you will end up with a bill for callout of £99.

Given that you have mentioned that you don't have micro-filters plugged into your line, it sounds like you might have a fully-fitted filter.

Does your master socket look like the one posted by imjolly? 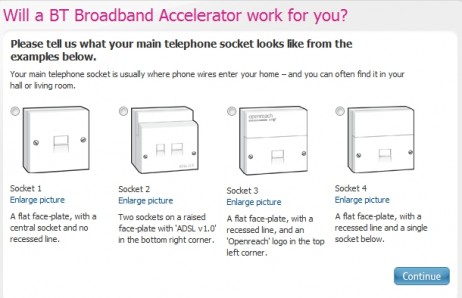 It could even look like this one (but probably doesn't: 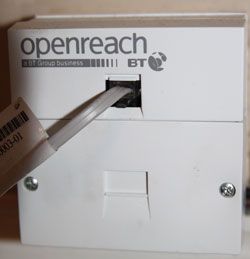 Which of those pictures looks most like the current master socket?

And (an obvious follow-up) where do you plug the router/modem into? Is it at the master, or an extension socket? If an extension, what does this look like?

"It could even look like this one (but probably doesn't:"

In fact my socket does look very much like that one. The only difference in so far as I can tell is that mine does not have an Open Reach logo on it. Nor a BT one either. But apart from that it is very similar - two jack plugs stacked one on top of the other, for phone and Hub respectively.

This is the only socket in the house, and we thus plug the phone and the Hub into it.

once found detach bottom half as shown then conenct a filter to test socket and then router to filter then pc to router using existing cables.  once done post new stats

Not entirely sure about this to be honest. It is the first socket in my home, but there is a plastic box with a BT logo on it immediately next to the front door. It's about the size of a box of matches, slightly bigger - wires come into it, and are then routed down and beneath the flooring.


If you like a post, or want to say thanks for a helpful answer, please click on the Ratings 'Thumbs up' on left hand side.
If someone answers your question correctly please let other members know by clicking on ’Mark as Accepted Solution’.
0 Ratings
Highlighted

I believe so, yes.