I've recently upgraded to infinity and am not getting the full rate of download. approx 39Mbps when stated rate for my house is "at least" 52Mbps and "should be" 64Mbps to 74Mbps. I moved into the house last July and adsl broadband was running at 16Mbps which was significantly better than I could get at my previous house so I didn't bother to investigate speeds/noise etc at that point. Inifinity has only just become available hence the switch in January

There's a lot of extension wiring inside my house (large house and at least 10 extensions sockets fitted probably 8 to 10 years ago as part of renovations with the phone cabling running inside the walls.)

So a good starting point is that the extensions should be isolated to ensure they are not the causing the vdsl to throttle down to 39Mbps.

So that's the background - now for the question...

On investigation I've found that my master socket looks like this! : 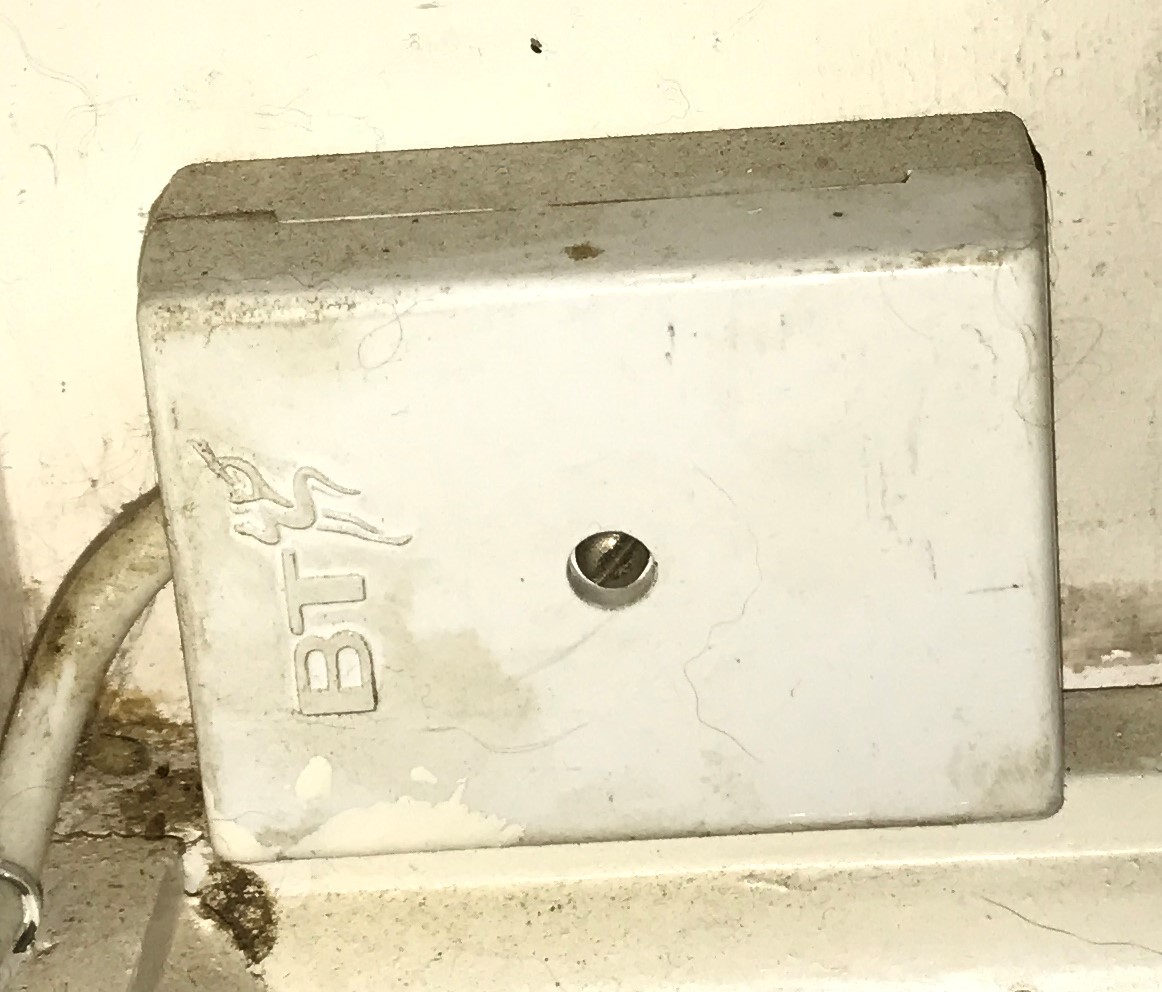 The phone line comes into the back of this box from outside.  The white cable on the left of the photo runs off to the phone sockets inside my house (none of which are BT/openreach ones)

The first phone socket is attached to that white cable a few metres along the wall off the back of this it daisy chains (hard wired) to the rest of the house.

Is that first socket my property - can I touch the cabling inside it so as to replace it with a box with an interstital faceplate or as it is "hard wired" to the bt master socket then does that complicate what I'm allowed to touch?

That's just a junction box, as you will see if you unscrew the top. Ideally you need the two wires from the street cabinet as short as possible to your master socket to get the best speeds.

I get 52Mbps, but the street furniture is outside my house and the wiring run is approx 15m to my master socket.

Go to solution
That's either a BT80b or BT78. Can't tell without seeing inside of it but whatever it is its part of Openreaches Network and you can't make alterations to it.

A Block Termal is just a joint for an External Cable to connect an Internal Cable. The first socket it then goes to would technically be the Master Socket, be it an Openreach one or a third party one someone else installed.
0 Ratings
Highlighted

It sounds like all your phone sockets may be star wired which if they are it will cause you problems with your broadband speeds.

Thanks all for the quick responses - that box I posted is just a pass through with some connectors inside it.  I wasn't sure whether the BT ownership ended at "first connection inside the house" or "first socket that can have a phone plugged in".

Yes it also looks like my extensions are star wired as this photo is the other end of that white cable - and the grey cable going off up the wall appears to lead to the rest of the extensions in the house (3 or 4 cables radiating out from the next box in the chain and who knows what daisy chaining off after that).

There's a separate cable coming in from the box outside which goes to a openreach "master" socket but that line is dead with no ring tone - appears the previous owner of the house had 2 or 3 separate lines connected.

So what are my options? 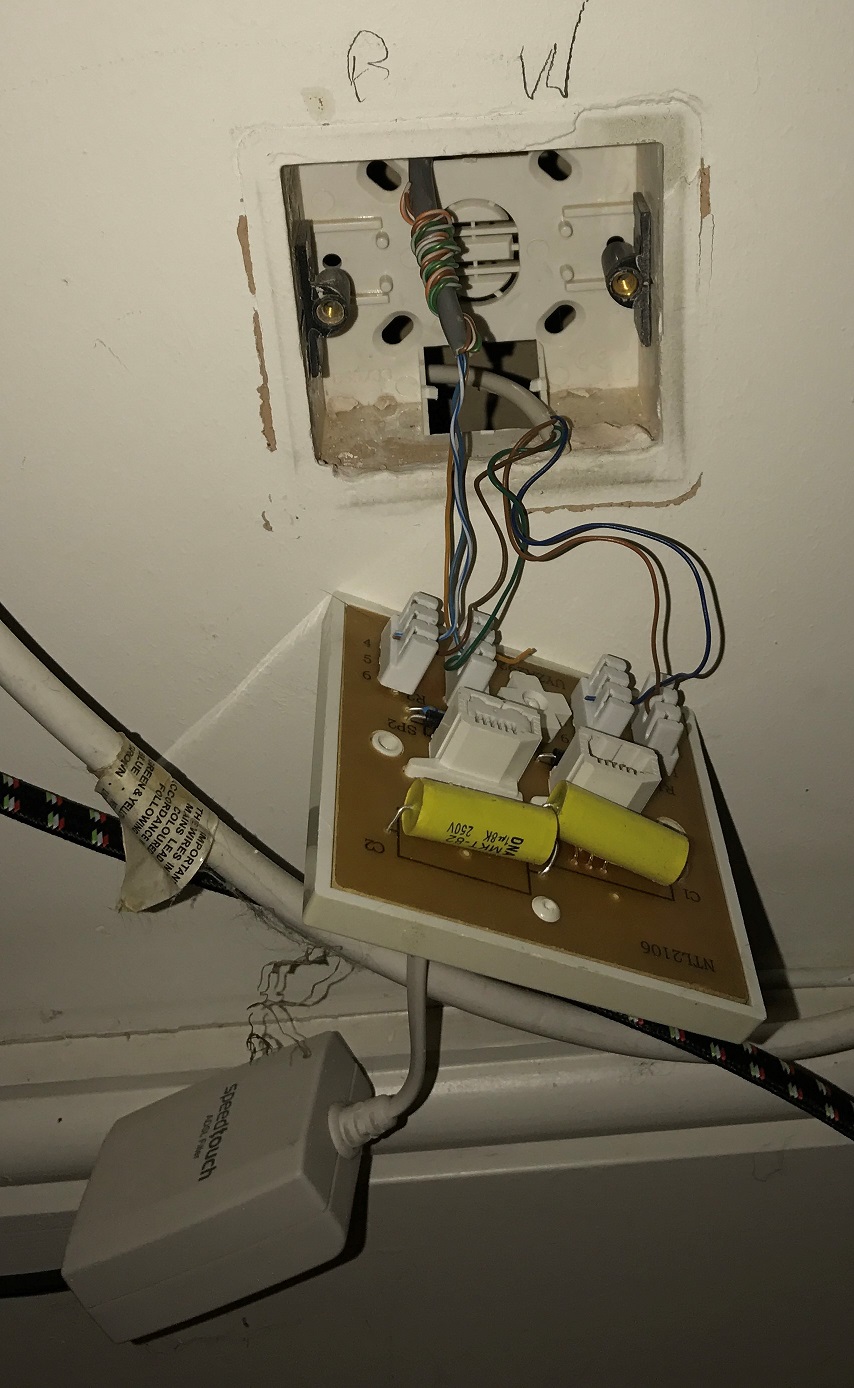 The official answer is that BT will need to fit a master socket and then your extensions can be wired correctly.Cost about £130.

Unofficial answer, either get a local telcom engineer to do it for you or do it yourself. If you mess up and need BT to fix your mess it will cost you £130 or possibly more if you cause a problem with BT network.

Go to solution
Your best of getting a Broadband Boost Engineer from Openreach and not a Graduate from the University of Youtube.
0 Ratings
Highlighted

I didn't want to get BT out on a fault investigation - charge me for finding it was my extensions and go away again (leaving the problem in place) but as it appears I can pay for their engineer to come and do what I need then I'll be going that route.  This should also mean that I can get the new master socket placed in a much more useful place for the router (my office where an inactive openreach box is) rather than the location I took those pictures in.

Furthermore having poked around I've now found that both of those ports in the master socket are active on two separate incoming pairs.  So I phoned my mobile from each and they both came up with my landline number.  But the router will only connect to vdsl on the left hand one (that has all the extensions hanging off it)  - looks like BT somehow split connection somewhere between the vdsl attachment in the cabinet and the exchange.

I'm slightly annoyed that BT connected the house up when it had extensions hardwired to the back of the master socket rather than simply replacing the master socket when their engineer connected it up last July and left me in this situation with no option but to pay them to come out again.

Hmm, Sorry, seems a limitation of the forum is that only one reply can be "marked as accepted solution" - I had intended to tick most of the responses you had all given as "valuable input".  Thanks again to all of you for your time and the speed of your responses

Hmm, Sorry, seems a limitation of the forum is that only one reply can be "marked as accepted solution" - I had intended to tick most of the responses you had all given as "valuable input".  Thanks again to all of you for your time and the speed of your responses

If you wish to do that then just click the star under their user name.