This is a perfect example of why having a MANUAL settings page in the web interface of the disc would be a good idea, so that you can specify the IP address of the master disc to join a new disc.  Having such an option would have prevented a lot of stress, upset and cable pulling.

The GOOD NEWS is that I have now managed to add the 2 new discs to my existing 3 disc setup = 5 working discs.

For those that read this blog at a future date...

The problem seems to be due to the discs relying on multicast to locate the master disc and perform the sync operation as part of the "add new disc" process.  DanO requested that I either check the multicast settings on my netgear switch or plug both the master disc and the new disc into the "router".  My network is rather more complicated than just a router and the wholehome discs.  In my case the "router" is not a BT Home/Smart Hub but a CISCO router and nowhere near wholehome discs, so not an easy request.

The objective being that the dumb 4-port switch then had internet connectivity via the netgear switch, but both the master and new disc were then on the same physical, dumb, 4-port switch, and thus multicast packets would reach all ports of the dumb 4-port switch; ie both discs.  [This was easy for me as I had a spare dumb 4-port switch in the cupboard.  If you do not have a spare switch lying around then you will need to connect both the existing master disc and the new disc into the device that connects to your telephone line or xDSL modem, assuming of course that it has more than 1 LAN port].

With the 4-port dumb switch in place, I factory reset the new disc and followed the standard "add a new disc" process, which this time worked as described.

Watching the new disc startup, whilst it has an ethernet connection attached, you will know things are going to plan as when it reaches the solid blue light for the first time it will not stay solid blue for more than about 15 seconds at which point it will turn purple and start flashing.  That is the syncing process happening.  Then after a short while it will turn blue and then remain solid blue.  At that point you continue with the "add new disc" process (ie: power off, remove ethernet, power on).

Once configured, the new disc can be placed where required and the master disc reconnected to the link it was using previously.  My dumb 4-port switch, having served its purpose, was returned to the cupboard until next time!

All of this hassle, stress, plugging/moving of discs, the need for another temporary switch, scouring the internet, following blog articles, contacting BT support (which didnt help), etc, could all have been avoided if in the web interface of the disc there was an option to specify the IP address of the master disc and a button that said "Sync/Join".  Then in the situation where the automated "add new disc" process does not work you just fill in the web form and press "Sync/Join"... Simples!

So you can add to your notes regarding the NetGear GS724Tv4 ProSafe 24-port Gigabit Ethernet Smart Switch.

My netgear prosafe did not have the option "block unknown multicast address" that you suggested checking.

I have discovered that is because my switch is currently running version 6.3.1.4 firmware.

The "block unknown multicast address" feature was added in the latest firmware version 6.3.1.9

So you can add to your notes regarding the NetGear GS724Tv4 ProSafe 24-port Gigabit Ethernet Smart Switch.

My netgear prosafe did not have the option "block unknown multicast address" that you suggested checking.

I have discovered that is because my switch is currently running version 6.3.1.4 firmware.

The "block unknown multicast address" feature was added in the latest firmware version 6.3.1.9

Thanks for your comments, I'm glad you're working okay now. We are reviewing the disc add-on process and will be making improvements in future releases.

And regarding the Netgear GS724T switch - thanks for the information that the setting was not there until v6.3.1.9 firmware. Can you confirm whether it defaults to enabled or disabled? 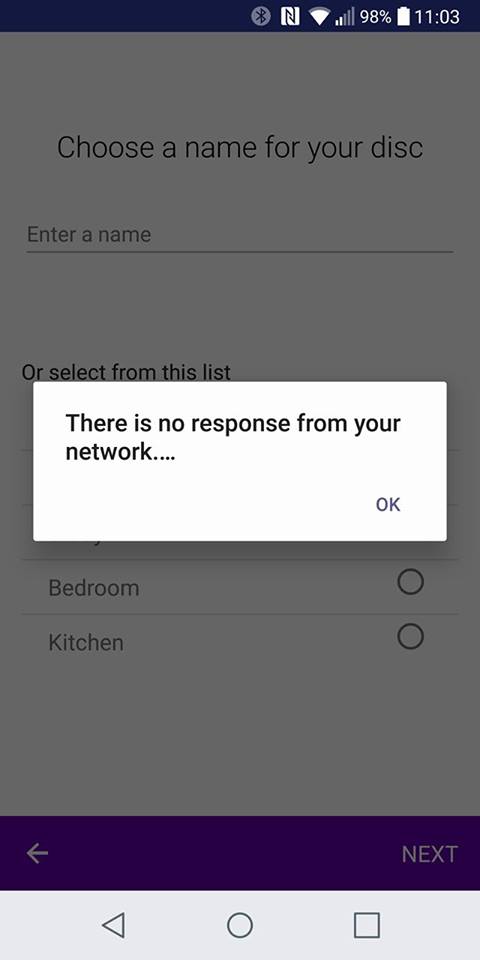 i cant seem to get past this no mater how many times i hard reset the hubs and delete the app off my phone.

I can confirm that immediately following the upgrade to firmware 6.3.1.19, the option "Block Unknown Multicast Address" is default "Disable".

@Dbaplaya - that's exactly the problem I'm having and at exactly the same point.  Driving me nuts!!

I've tried everyinth I can think of.  Rebooted routers, discs, phones.  Uninstalled and reinstalled the App.  But still when it asks me to name trhe disc - "there is no responese from your network".

I can't connect via:  http://mybtdevice.home  either.  I get "This site can’t be reachedmybtdevice.home’s server IP address could not be found."

@Dbaplaya - that's exactly the problem I'm having and at exactly the same point.  Driving me nuts!!

I've tried everything I can think of.  Rebooted routers, discs, phones.  Un-installed and reinstalled the App.  But still when it asks me to name the disc - "there is no response from your network".

I am having the same problem.

I set the Whole Home up just after Christmas using my Galaxy S8 & all was well.

I reset my phone last week & when I re-installed BT Whole Home app this problem occurred.

I have reset everything, used new cables & can't get beyond the point mentioned above.

Can you try installing the first disc with no Ethernet cable plugged in to see if this lets you get past the first screen?

E.g. once you get to that screen, unplug the Ethernet cable and wait for the disc to turn red then name it.

We're investigating this issue and any information about your set-up will be very useful.

Interestingly, I did make some progress and have all 3 discs now working.

TalkTalk Broadband with their latest hub.

Samsung S8 and S7 Edge phones with latest version of the App.

None of these worked, it would hang every time I tried to assigning a name to the first disc.

But I then tried Chrome browser on my phone and the mybtdevice.home and I got the logon page.  So entered the logon and could see that the first disc was connected and named correctly.  I was able to set the SSID and password to my preferred values (and as stored on all the kit in my house!).  From there I was then able to go through the logon process with the other discs - although only very limited options, eg no custom names, no way to turn the LEDs off etc.

All three discs are now working.  But the app doesn't recognise it and still wants to go through the initiation process and still hangs at the first naming.

Hope maybe this helps others find a temporary way round the problem or helps with the diagnosis of the issue.