Two buildings next to each other:

Cellar/basement has a shared portion in which there is a new Distribution Point installed by BT and from where all 7 lines go to the street.

I've had BT Infinity installed for House B and was told that I could not get Infinity 2.

Entering the new phone number on the DSL Checker was recently showing max clean speads of circa 40-50 down and 6-10 up. I am actually getting the top end of these speeds - great!

Now, however, checking the line phone number that I was given (I haven't tested the phone as I do not use the phone), the DSL checker for some reason shows the following very low numbers:

Yet, when I check the address of B, it shows numbers similar to what I am actually getting:

HOWEVER, when I check ANY of the flats in A, it shows much higher numbers:

So what the hell is happening?

Why is House B getting a lower speed than all the flats on A when they are on the same DP??

My theory is.. there used to a be a line in House B many years ago and it was disconnected (i.e. not used for over a decade), yet the address for B still remains on the system as it is a property and is what has been used for the DSL look-up and Infinity install. However, B is ACTUALLY on the new DP as all the flats which are all new addresses.

What do you guys think? I basically want to get on the fastest possible fibre if it is available to me!

On another forum this user has posted a screenshot from his router which shows him syncing at 54995/9995. He is syncing at the maximum for Infinity 1. It's 99.9% certain that he could sync higher so this definitely looks like a database error.

you really need to get a cheap about £5 corded phone and check your line and your phone number by dialing 17070  it is also a great investment as it is first check if you have broadband problems and make sure problem is outside you hope so you do not incur the callout fee of £129.99

If you have an active FTTC service your number will ALWAYS say available even if there is a waiting list.

Address will always give a true indication of cabinets capacity (waiting list/available).

edit: the OP should ignore this post above they do not need to go buying corded phones and running tests this is a simple database mismatch between the address and phone number.

If they ordered a 2nd line BT would give them Infinity 2.
A database error on their number only is preventing an upgrade.
0 Ratings
Reply
Highlighted

The hub connection stats would answer the question.

Does this help? I just put on a new VDSL face plate (using the original RJ11 cable that came with the HH ) and plugged it back in logged in:

Unfortunately the stats you've posted do not show the Max data rate.

I don't see why the maxdatarate is necessary.
They are synced at the maximum, with a 7dB SNRM.

With a 6dB SNRM target they have an attainable about 3Mb higher than current sync if it's just for your curiosity.

If BT do what they should and allow an upgrade to Infinity 2 then DLM may allow the line to lower to a 3dB SNRM which would give a max attainable nearer 66-67Mb (Huawei cabinets only)
The upstream should get around 12-13Mb, maybe a little higher.

The OP's screenshot shows the BT Wholesale checker estimates for their address are a little low showing a clean/high of 48/8.
They are synced at the full 55/10.

The BT Wholesale checker estimates for their number are way way way off.
They show a maximum of 6/1Mb.

This needs corrected or it will forever prevent the OP ordering certain FTTC products that involve the telephone number.

Just obtained some detailed stats from the router: 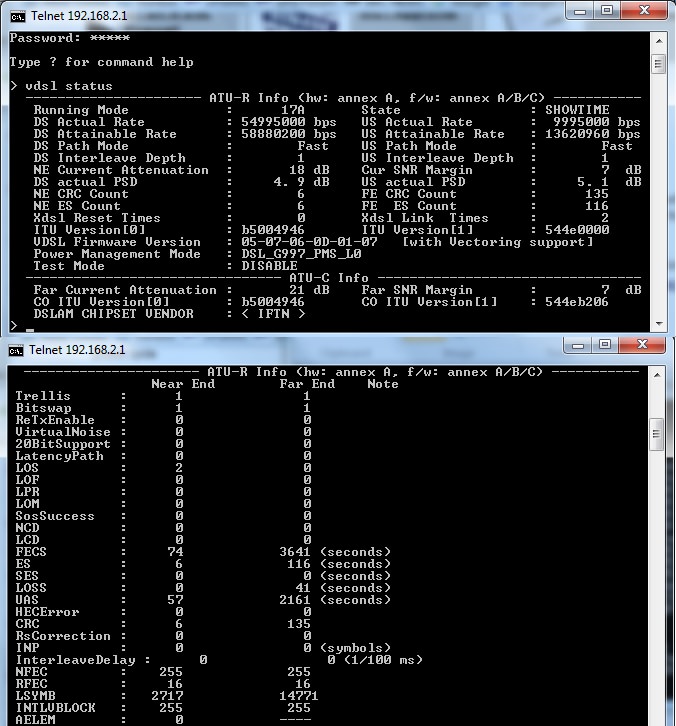 It shows you are on an ECI cabinet.

If you upgraded to Infinity 2 you would get 58/13 rather than your current 55/10.
Not a huge improvement.

If you were on a Huawei cabinet that could have gone up to about 68/10 with potential DLM improvements but that currently isn't available to ECI cabinets.

Even if you decide you don't want Infinity 2 or BT refuse to upgrade you, you still need to get BT to have OpenReach correct the database for your number as it could cause issues in the future.
If you renewed your contact they would quote/guarantee you the incorrect figures.
0 Ratings
Reply