Hi, I'm experiencing very bad lag and high latency in online gaming. I mainly play madden and nba 2k20 but this issue affects every game that I play and its really frustrating.

- Tried my own router

I've literally tried everything that I can on my end. I contacted ea about this issue and they told me to run a UOtrace and pingplotter to their server to see what is happening. The pingplotter test I've been doing for the last 24 hours and it shows that the pings/latency are all good and stable but the ping spikes over 100ms on hop 10 which is uk.zayo.com. It's also showing high packet loss on hop 11 and 12 and the high pings carry all the way to the end hop which is easo.ea.com which ea told me to run a trace route to. So, based on the results this has lead me to believe that hop 10(uk.zayo.com) is the problem because this is where the ping/latency is spiking and carries all the way to end destination. Can anyone from BT or anyone on here that knows their stuff about networking that can help me? This issue is driving me crazy as my connection is ruining online gaming. My contract is up in about 4 months and I don't plan on renewing unless this issue can be resolved. Thanks 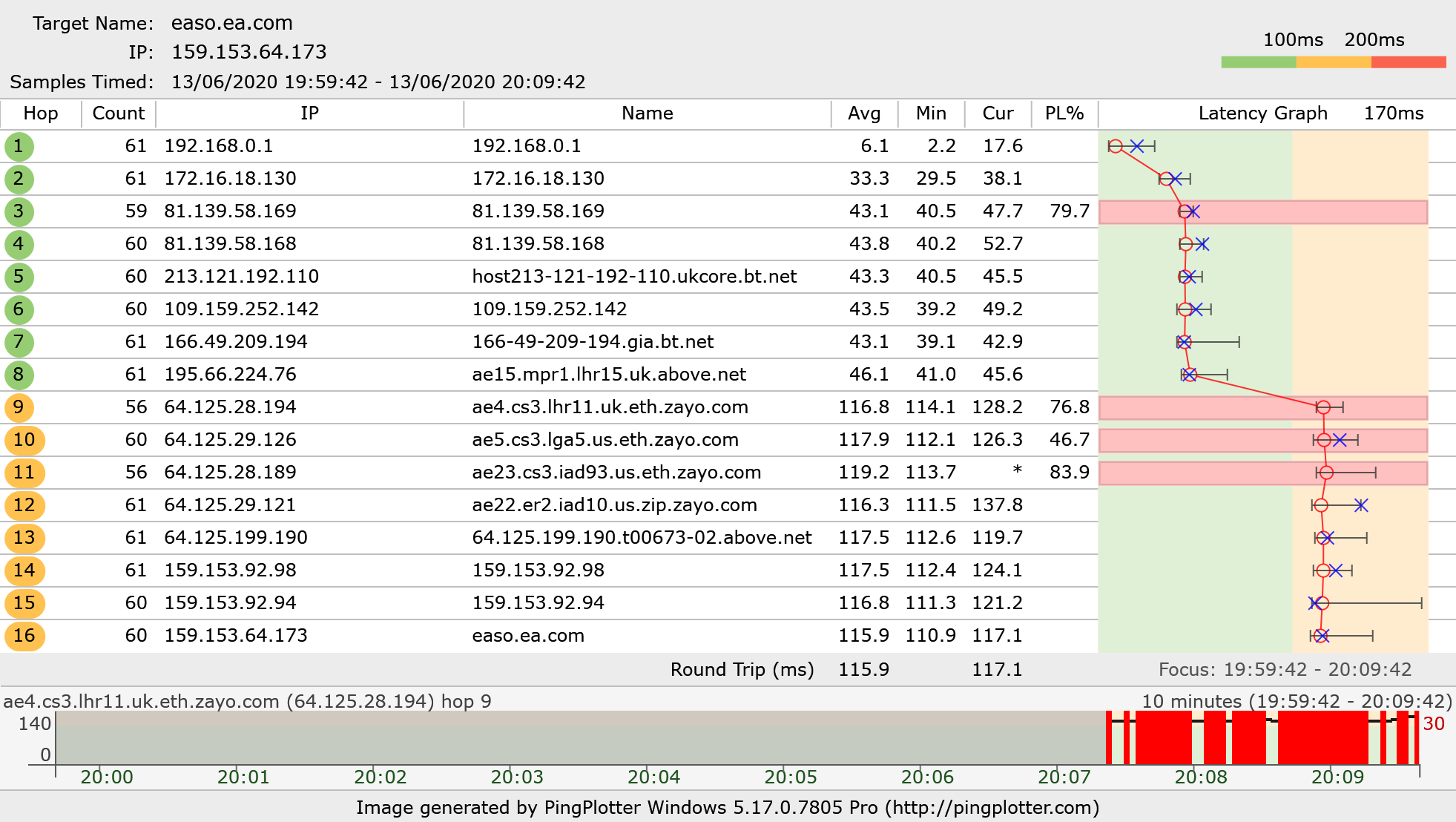 That would certainly agree where the problem starts and is continued through that tier 1/2 company and I would expect them to have a resolution in place soon. They have a reputation to live up to.

Thanks pal. Would you advise me to contact zayo and show them my pingplotter or can BT do something for me?

Give zayo a go, it might just nudge them. Don't forget you are not their customer so be polite. Include your pingplotter cap as well if you can and don't worry about packet loss there, you had none at the destination.

Other issues occurring include getting disconnected from online games or other players start disconnecting from me. My download speeds are frequently dropping way below my min guarantee, lowest i seen it was 6.8mbps and upload speed is also dropping to 700 kbps or some nonsense like this. My connection isn't as stable as it shouldn't be as my speeds drop really low and then they go back to normal when i do  another speed test straight after. Cant get through on live chat and i don't really have the patience to wait to get through on the phone so I'd appreciate if someone from BT can help with this

Update: Been playing on pc recently while using WTFAST and my gaming experience is so much better, hardly any lag/latency maybe one laggy match or so depending on who im playing with or against which i think is normal for everyone. Since my gaming is better while using WTFAST this leads me to believe that my connection isnt being routed optimally to the gaming servers as proven by my traceroute. It is kinda annoying having to pay extra fee each month to use WTFAST but it is what is, its worth it as i can game now in peace and not getting annoyed constantly by lag.