i seem to have got my email accounts into a mess. Started because Outlook wouldnt receive emails (though would connect and  send) on one of two sub-accounts. The other sub-account had no problem. BT insisted it was a MS problem even though the settings on both accounts were identical and I knew the p/w as right. I "solved" the problem by resetting the p/w via webmail. That though caused an issue on my Android phone which I also use for emails. Basically I ended up with three accounts on the phone, one of which isnt listed when going to "Manage Accounts" on the Yahoo email app - so I obviously can't delete it.

I've looked back at webmail and this phantom account (temporarily called temp) now appears within the 2nd sub-account i.e. the one that was working ok but it has the emails from the 1st! I can see how to delete it there but it then comes with a warning that doing so will delete everything re that account and cant be undone. i don't want to delete the 1st sub-account from the universe, only from this strange association with the 2nd.

Any thoughts please - pic of where the account appears in webmail is below. 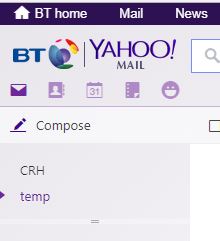 In the absence of any suggestions, I thought I would try another tack. I created another sub-account with the intention of linking it in the same way as the one I want to get rid of, then unlinking it to see if the new sub-account did in fact vanish off the face of the earth or just from the link.  When I went to settings, accounts, add a mailbox, the system tells me "adding accounts from your email provider is not supported"!!  In that case how did the existing mailbox link get there?

I would therefore still appreciate any comments on whether deleting the mailbox link does in fact zap the entire account (as the message suggests) or merely removes the mailbox link.

For the benefit of anyone else having this problem: having spoken to someone in Executive Complaints (I was raising another separate issue and asked this as well) I was assured that deleting the link between the two mailboxes did not completely delete the email account - only the details of that account accessed from the other. So I went ahead and said yes to the deletion after the warnings and so far the everything is working fine.