I'd also say you need to hurry up to reach a conclusion, if it's a new install you'll be under the 14 days ( I think) cooling off period. If you go past that time you'll be in the main contract term of 12 to 18 months.

To cancel then will cost a small fortune, my contract ends Jan 2020 and for me to cacnel will cost £228.

Like I said at the moment I'm getting lag via BT and it's only when someone is doing something like watching Netflix on the same network or when I use another network application on my PC such a Spotify- so it's not obvious and it's very subtle. Now I know what's causing it I can take steps to control it but ultimately it's still a laggy internet connection that's not reliable for online gaming. Whether BT can fix it is yet to be seen...

If you can't get anything resolved then I'd look at switching to Zen, at least they 'get it' in terms of latency and cater for online gamers, at least they might be more responsive when you have lag problems.

Still experiencing Lag in all online games. Im totally lost as what to do. I've tried everything i possibly can do on my end. Im  hardwired with powerline from my smarthub to ps4. Will buying my own router make a difference at all? Its the only thing i can do on my end but don't really want to buy my own router if its not going to make a difference. BT say my connection is fine, no problems whatsoever . Provided traceroutes to ea and they say its a router issue. When playing black ops 4 the ingame connection meter shows my ping at 40-50ms and does rise as high as 80 and thats when freezing/skipping occurs ,i this all leads to me to believe that its a blufferbloat problem causing the lag/latency. Anyways, i did a dsl report comnection test and post the result.

I play alot of call of duty and the best way to describe my experience is playing at a big delay to other players, hit marker delays i.e Shooting people first but they kill you with fewer bullets, getting put into lobbys  on the team thats getting destroyed by something like 20-70 tdm scoreline this happens to me alot which hints at a latency problem on my connection. When my online experience is at its worst is when the game is playing fine then all of sudden the game is being played so fast, feels like other players are moving around at 100mph, so fast that i dont dont know what's going on xD i recently read, that if a online game feels slow/fine than all of sudden feeling too fast then its a blufferbloat issue. Sometimes when im playing CoD, my game feels like this.

I wouldn't know where to start really on a console, I'm a 100% PC gamer, so I've no idea if there's any settings you can change on your console, game or network ? I'd guess probably not.

I will say if BT has checked your line and your speed is what BT estimated before signing up then you're in for a battle, all BT are concerned about is speed and line faults, ping or gaming problems isn't even on their radar - they won't want to know even though BT advertise that their connections are "perfect for gaming".

If it was me I'd probably find the COD server IP address or any COD server IP address and use ping logger (google it) on a laptop, set the ping rate to 500ms and just watch the trace, if it's bouncing all over the place then at least you can see the problem and verify if any changes solve the problem. Watch out for dropped packets as well, that would also be a disaster for any online gaming.

I'd also look at the interleaving level on your line, when an engineer was looking at my problem he changed this which doubled my ping, it didn't solve the ping spikes at all but it certainly made a big difference. My billion router fortunately has excellent stats so there and then I showed him and he reverted the change. My router shows the interleaving level and the corresponding delay - no idea if this delay would vary, currently I have a 0ms delay from interleaving.

In general BT are unlikely to help, you've got to diagnose this yourself and if possible find something you can challenge BT with, although as mentioned they won't probably do much if you've just got a bad ping.

Oh an also watch out for game ping reports, a lot of the time it's either a snapshot of the ping or an average, so won't necessarily show ping spikes or any kind of buffering happening.

Do you a cod server ip by any chance so i can run traceroute? Looked all over the internet and couldn't find one

You could try the overwatch server IP I've been using 185.60.112.157, this gives reliable results, failing that google for 'gametracker', then click on the servers button, there's pulldown menus to select game and location, I'd start with something in the UK.

Traceroutes show no problems 23&28ms pings every hop. Dsl report test i get A connection quality rating but a D blufferbloat rating i dont know if that's the norm for most people but that does stand out as a problem. Im probably going to buy my own router and see if that fixes my latency problem, people do say the default isp routers are not the best for gaming but if i still have issues I'll have to consider cancelling my contract early and try somebody else. Thanks for help man, nobody from BT has bothered to post on here to assist me just you. Im just incredibly frustrated

Can you update me with the results please ? I'm having the same issues as you and I'm also getting a rating of D when it comes to bufferbloat, I don't want to waste money on a router that won't do anything. 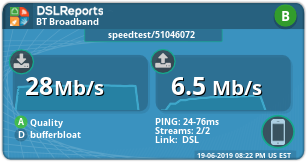