It doesn't 'hide' them at all. They are outside of the DHCP range of the hub.

Ok, this is how it works. In order for a device to connect to a router and hence the internet it needs an IP address. This address is obtained in one of 2 ways. Either the address is manually configured on the device ( a static address) or the device requests an address from the router (DHCP allocated address). As a further refinement, it is possible on some routers (most) to allocate the same IP address each time rather than a random address from the pool based on the MAC address of the requesting device. This is called 'address reservation', however, it is usually erroneously called 'giving a device a static address'. It is still allocated to the device via the DHCP mechanism. Routers allocate the addresses from a pool of addresses that are available to the DHCP server. It is usual for this pool to be less than the whole subnet to allow devices to given static addresses that won't conflict with DHCP allocated addresses.

We're splitting hairs. Yes, outside the range of the DHCP and not automatically used, but available by assignment using the device.

I'll see if I can link to an image of a Homehub network listing using user assigned addresses outside the DHCP range.
0 Ratings
Reply

Not sure how clear this image is but shows that I assigned addresses out the range of the DHCP by fixing them on the device itself.  (!92.168.1.1 which is absent used to be my previous router's IP Address)

I could, I suppose assign addresses of the YouView boxes from their respective settings menu.... 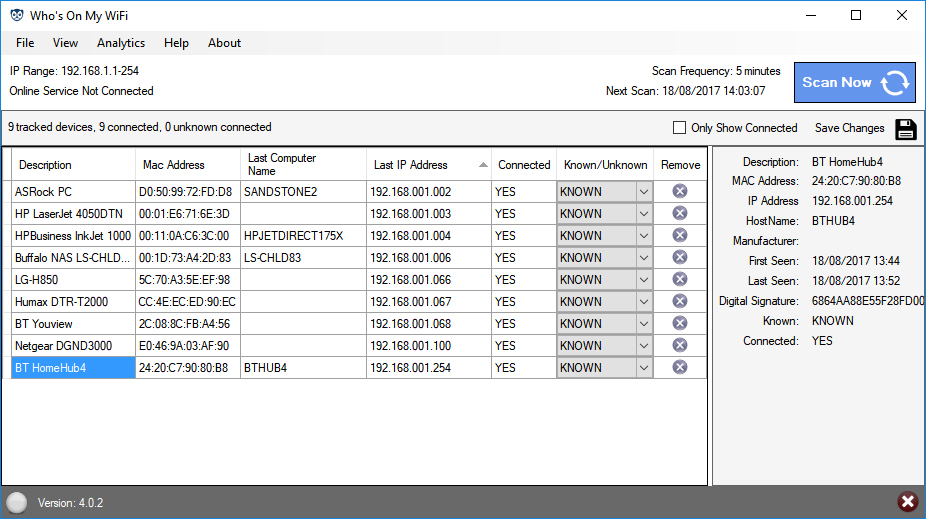 When you say "I assigned addresses out the range of the DHCP by fixing them on the device itself" you mean that i) the 192.168.1.100 is an address from within the DHCP scope that could be assigned by the DHCP server function on the Hub; and ii) the address has been statically configured on the Netgear?

1. There's nothing on the Hub stopping you doing this, just as there's nothing stopping you statically configuring 192.168.1.254 on the Netgear.
2. It's not a wise thing to do. As the address is from within the DHCP scope that is managed by the DHCP server function on the Hub, the Hub could still legitimately allocate this address via DHCP to some other device. You then end up with an IP address conflict.

For point two, some DHCP servers will query (ping) an IP address before "offering" it to a device, and if it get's a response allocate a different address. Not all DHCP servers behave this way and so, as I mentioned above, you could end up with an IP address conflict.

I have to say I agree with @Liam_'s previous comment about not catching your drift. None of your comments to date relate to DHCP Reservation i.e., the question from the OP, and the latest comment is suggesting doing something that is fundamentally a bad idea.

Apologies if you feel I've not contributed and been unhelpful.
0 Ratings
Reply

I'm sure your posts were will intentioned, but in my mind they were confusing the issue. The last thing we would want is for someone to read this and believe that statically assigning an IP address that is part of the Hub managed DHCP scope is the correct thing to do.

So, I've figured this out after 45 minustes of swearing for the new SmartHub 6 ...

1. StaticIP: You set this on your device, not router.
2. DHCP: You can configure the range of IPs available from Advanced Settings > My Network > IPv4 Configuration
3. DHCP Reservation: Reserving a specific IP for a specific MAC Address from the router (can be outside the DHCP range set at point 2) is done by following the steps below:
a. Go to Advanced Settings > My Network > My Devices
b. Select the device you wish to reserve the IP for
c. Click on "Always use this IP"
d. Now the IP box is editable, edit the IP and save (I recommend also giving a meaningfull name to the device if it               doesn't have one)
e. Restart the device you've made the change for (alternatively, disconnect and reconnect)

Worked for me today on about 5 devices, settings get saved even after I restart the router.