Sign In Forum Help
Turn on suggestions
Auto-suggest helps you quickly narrow down your search results by suggesting possible matches as you type.
Showing results for
Show  only  | Search instead for
Did you mean:
Options
andy1231
Beginner

I recently moved into a flat and have had Bt broadband installed, my line went active but didnt work just kept getting purple lights flashing on router, which means no connection, the master socket was half hanging of the wall when i moved in and the faceplate didnt look connected properly, I have a feeling it might be the master socket but am confused with the wiring. have had a look at it but cant work it out properly have tried the White and blue cable in port A and the blue and white cable in port B and run through the test socket but not working. The master socket is an old NTL one. 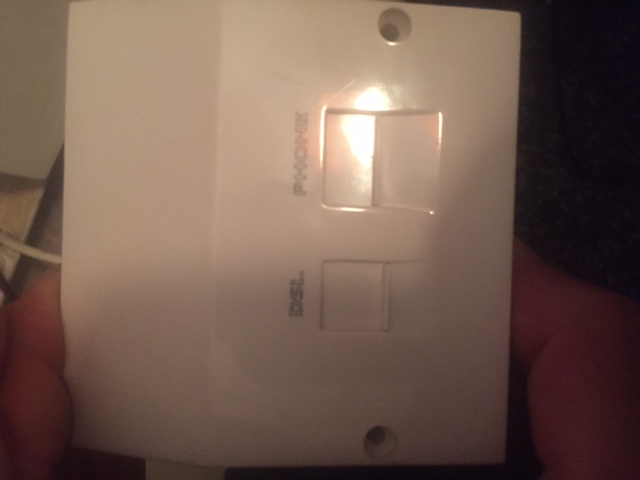 On the extension wiring on the back nothing is connected but as it was half hanging off im not sure if the internal wiring was connected or not.

So the black line looks like its coming from outside so im assuming is the main line into the house, it leads outside of the house and runs down through an airbrick into a flat at the front of the property going towards the main street im assuming as we are at the back of the property. On the inside it wasnt connected to anything at all in the socket, looks like the two blue and white pairs were routed towards the front end of the faceplate but werent connected to anything, but could have come out as the faceplate was hanging off.

Strange thing now i dont get is the white wire was originally connected to the A and B on this test socket, white with blue on A and Blue with white to B, so is that the main wire coming into the flat? it leads into the kitchen just around the corner where there are two sockets none of which have their faceplates connected to the wiring. 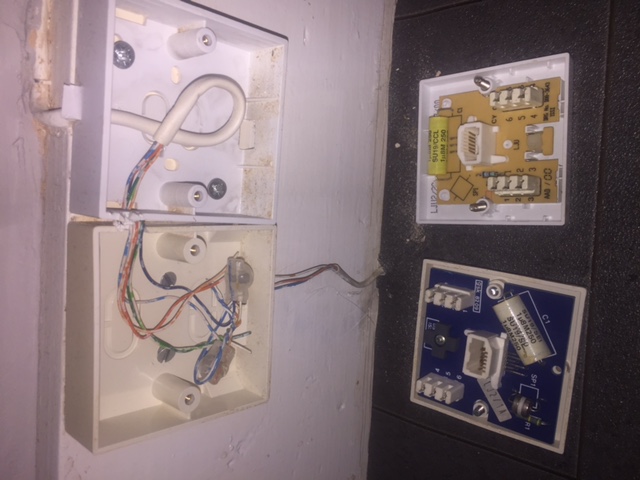 as you can see cable runs in from right side into first socket which has a bt faceplate straight into socket on left so not sure if master socket was originally moved from here. It runs into the left handside socket and then the blue and white pairs connect to orange and white pairs which go into the floor but no other sockets, we are on the first floor.

Really not sure what to do, dont want to be charged £130 for getting BT out to fix, I have tried the two different white and blue pairs in A and B with the test socket in what appears to be the master socket but they dont work, i am just pushing the wires into the terminals though, i dont have any special tool so not sure if that would make any difference.

Any help would be gratefully appreciated. Just to add i get no dial tone when plugging in a phone either.

Welcome to this user forum. @andy1231

As this is a new installation that does not work, and the wiring is not clear, then you need to arrange a visit from an Openreach Field technician as soon as possible.

As it within the first 28 days, its classed as an Early Life Failure, and should be sorted free of charge, so you need to act now.

excellent, so i wont be charged for anything?


excellent, so i wont be charged for anything?

I have asked for clarification from a moderator, on this issue. But on a new provision, you would be expected to receive what you paid for. Most times there is no issue, but if there is, then it should be sorted as part of the installation charge.

At this stage, I would arrange a visit so you get it working ASAP.

There will be no charge for, as @Keith_Beddoe mentioned, an early life failure within 28 days for a BT Broadband install or regrade. If you need help getting an engineer out to check your broadband and line let me know.

Thanks for your help guys

Ok guys so i had an openreach engineer come around he said none of those boxes are working, so we have no line but he used a tool to pick up a signal which showed we have a line coming in near the door and running through the hall towards the lounge but he couldnt find the actual wire under the carpet so thinks its under the floor boards. It may have been connected to the BT box that was is in the kitchen at some point but looks like its been cut or something.

He said we are going to have to pay for installation of a new line or we can try and find that line and connect a box ourselves from maplin or something to save on installation.

Is this correct and i thought only BT/openreach can play around with the back of mastersockets?

Thanks in advance for any help

You should not have to pay, as you must have already paid to have line line provided in the first place, so its an early life failure.

It needs a new line provided from the point of entry, to where you need the master socket. The old untraceable wire can just be disconnected.

I would arrange for this to be done, and sort it out afterwards.

It may be best to get a moderator to sort this out. I have asked for assistance.

Send us in your details using the contact the mods link in my profile.

I can have this investigated for you.